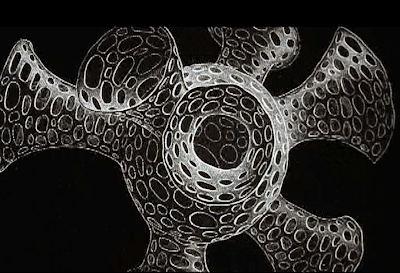 Due to a major (positive) life event I have had in the past couple weeks numerous old friends, old photographs, old possessions, and old ideas all turning up unexpectedly. A few weeks back I cleaned out the garage and dug up several boxes of old records, this week I managed to get the turntable hooked up and listened to some tracks that have been following me around unheard of for two decades or more. Old Rounder Records disks (Vassar Clements' Crossing the Catskills, obscure Robert Fripp projects, Roland Kirk Live in Copenhagen 1963, Siegel-Schwall Band. Sweet stuff. Listening to it after all these years felt odd. Most of it I still liked, but not necessarily for the same reasons I liked it back then. I am not the same person I was back then, though he and I obviously have some things in common. 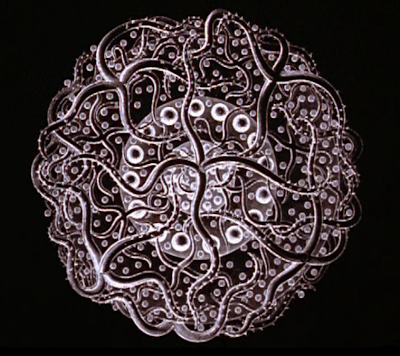 Some weeks before that I stumbled upon the documentary film Proteus which brings together a bunch of my old interests -- form in nature, Coleridge, reconciling science and religion. It is primarily centered around Ernst Haeckel, known mainly today for his exquisitely trippy illustrations of radiolarians and other natural forms, but who was actually one of the major figures of 19th century biology. Large parts of the film are rapid-fire animations based on his drawings. These interests of mine, like the records, have been effectively sitting around in boxes getting slightly musty and mildewed, and it is with mixed feelings that I unpack them and examine them after so many years. 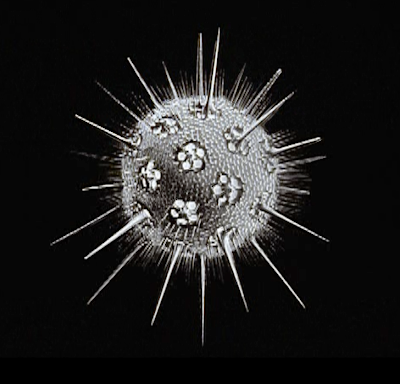 Oddly the film did not touch on the more controversial issues surrounding Haeckel -- his advocacy of eugenics, anti-semitism, and source of Nazi ideology, and accusations that he falsified some of his famous drawings that were a staple of evolution textbooks for decades. The former set of accusations seems exaggerated, since in fact the Nazis banned Haeckel's works along with others advocating "œthe superficial scientific enlightenment of a primitive Darwinism and monism", but it's still an unsettled issue among historians.

My attraction to this stuff has an ambiguous quality. I am fascinated by form and by the various holistic, romantic, or platonic currents of thought at the margins of science, but feel like I can't quite grasp it or devote myself to it wholeheartedly as some do (I dabbled in computer graphics and generative art but don't really have the artist's sensibility). Such stuff almost always seems to veer off into an unproductive self-righteousness and navel-gazing, or worse, cultishness. My background is in quite the opposite direction, but I am unsatisfied with it as I am with all belief systems.
Posted by mtraven at 9:02 PM 2 comments:

The protests and counter-protests and mildly violent mobs that are occuring at town halls around the company reminded me of Weimar Germany, and Mark Kleiman had the same thoughts. But a little thinking made me change my mind. What's going on now is nothing like the street brawls between factions of that time, because we live in a wholly different media environment.

You can bet that when Nazis went out to the beer hall after beating up some communists, they were bragging about how many heads they smashed. In our era, when union people and random conservative nudniks mixed it up briefly, each side was bragging about how much they had been victimized. One black conservative goes down for 2 seconds and its a national scandal, amplified to hysteria as only the perverse echo chamber of the right can.

In Weimar Germany the street was an actual locus for political contestation. How much power your side wound up with was directly related to how much muscle you could bring to a brawl. In our time, the locus is the media, and your success depends on whether you can get your YouTube clip picked up by the cable talking heads. Everything is spectacle: "All that was once directly lived has become mere representation."

I have sometimes complained that Americans these days can't get off their fat asses and protest outrages that demand action. On the other hand, Weimar did not end well. Maybe we are all better off now that the struggle goes on in TV studios and Google's PageRank engine.

On the other hand someone is bound to be killed or seriously hurt at one of these things soon enough. The wingnut hysteria seems like it has to keep increasing, "doubling down on craziness" as some put it, and there are an awful lot of unstable individuals with access to guns out there. What happens then, I don't know.
Posted by mtraven at 3:29 PM 1 comment:

If I had another life to spare I'd like to do research in memetic epidemiology -- how ideas spread and mutate through populations. Yesterday, Glenn Beck publicized a deeply moronic piece of hysteria -- that cars.gov, the Fed-run consumer site for the cash-for-clunkers program -- was the thin edge of a wedge of complete government takeover of everything on your computer!!!! Of course, there is approximately no basis. There is a bit of legalese on a page that is only for car dealers, consumers never even encounter the hideous piece of text that supposedly permanently hocks your computer's soul to Obama.

This looks like an interesting case, epidemiologically speaking. There appears to be a single source (Beck) and you can see it trickling slowly through the blogosphere. It's pretty easy to identify. Probably it won't spread too widely; even the wingnut sites have comments pointing out how silly it is.

What's amazing to me is the mainstreaming of this kind of stuff. It's one things for stupid memes to propagate over random blogs, but this is being instigated from a major television show, backed up by one of the largest media corporations. Kimberly Guilfoyle is if anything even more hysterical than Beck -- this is a woman who used to be an assistant DA and was wife to Gavin Newsome, mayor of San Francisco and likely next governor of California. People in stations like this used to have a smidgen of responsibility, but these people clearly haven't got the slightest interest in the truth, and are perfectly willing to spread bullshit if it helps stoke their narrative of the evils of the Obama administration.

Well, this meme will die out soon I predict. More significant winger memes include those the drive the birther movement (apparently infection rates in white Southerners are an astonishing 70% or higher) and the idea that that Obama's health care plan involves mass euthanasia of the elderly (some examples here and here). Ooooh, here is a neat convergence!

The euthanasia meme is going to go far, I predict. It just has the perfect combination of ingredients -- simple facts inflated wildly out of proportion, gruesomeness, paranoia, the invocation of sacred family ties. And seniors are easily manipulated.

Gary Farber does a good job with this sort of thing. Here, for example, he tracks the fauxtrage over a photo from the recent white house beerfest. But he's just one man and is not using systematic techniques. We need some serious analytics applied to this stuff.
Posted by mtraven at 8:35 PM 1 comment: