Have a Blessed Day

I just got phone spam from some health insurance seller (and who would be dumb enough to buy health insurance from a company that sleazily skirts the do-not-call list?). I didn՚t pick up, but they left a long voicemail that ended with “And You Have a Blessed Day”.

This really twinged my weirdness detectors. I don՚t think I՚d ever heard that locution used before. But apparently it՚s quite the thing, having started to take off in the seventies and getting huge usage growth in the last decade or so. 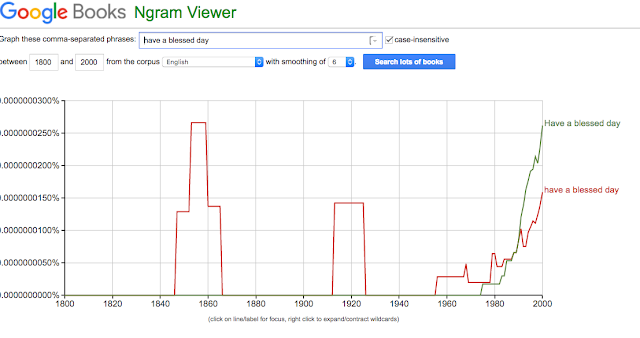 I suppose I՚m overreacting but to me it sounds like some Handmaid՚s Tale shit. Apparently it՚s a minor social battle in the culture war, but one that probably take place in more conservative parts of the country than San Francisco.

In a way it՚s a shame, it would be a perfectly innocuous and friendly thing to say, if there wasn՚t a culture war going on. But let՚s not kid ourselves.
Posted by mtraven at 6:31 PM No comments:

The Least We Can Do

This speaks for itself:


This was sent to me, a screenshot from Facebook. He deserves to have his post shared. It's literally the least we can do for him. pic.twitter.com/wAIIjohGXs
— PebblesJ (@MadisonJourdan) February 16, 2018

Except I fear that if Sandy Hook didn՚t get something to change, then nothing possibly can. Not to take anything away from the most recent tragedy (apparently we have to become god damn comparitive measurers of grief and pain, as if we were Olympic judges or something) but if 20 dead elementary school children didn՚t move the institutions of governance to action, what possibly could?

Oddly, 17 high school students maybe can – precisely because of their age and agency. Not the dead ones, of course, but their friends and peers can speak out, something that was not the case for Sandy Hook:

So yes I can see this playing out differently. Dead elementary school students produced a lot of hand-wringing and crocodile tears, dead adolescents might actually produce a force for change. I hope so.

It is stunning to me that we abdicated our responsibility to protect our children from guns for SO LONG, that those children are now growing into voters who are saying "Screw it. We'll fix it ourselves."
— William Salyers (@wlsalyers) February 18, 2018