He who builds his house by the sea builds on sand

If California slides into the ocean
Like the mystics and statistics say it will
I predict this hotel will be standing
Until I pay my bill.
-- Warren Zevon, Desperados Under the Eaves 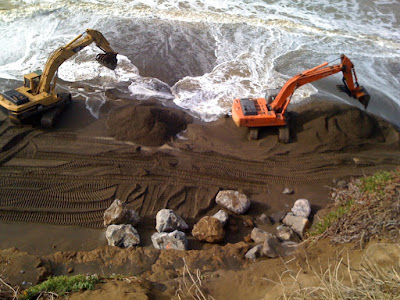 which is undermining the bluffs upon which stand some typical California cheap-ass apartment buildings. 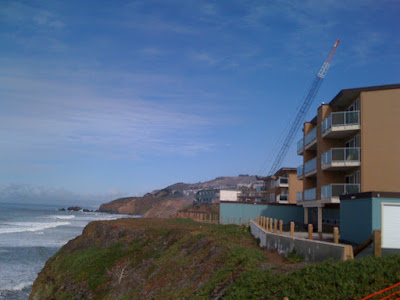 The analogy to the attempts of our weak, corrupted, and dysfunctional government to deal with its sea of troubles is too obvious. Economic collapse and climate change lap inexorably at the sandy foundations of our civilization. A line from one of the news stories could be the epitaph for the current era: They had a great view while it lasted.

Oh well, nothing abides*. Let's hope this coming decade is better than the last one and that whatever tides lap at our well-being, they do it slowly enough that the human talent for adaptation can successfully operate.
*with some exceptions
Posted by mtraven at 1:06 PM 8 comments:

Borrowing an idea from Brian Leiter's blog, I've gathered some of the better posts from the last year (where year is arbitrarily extended back into Nov 2008). If you filter out the random commentary and picking fights with wingnuts, some actual themes start to emerge; which I'm somewhat surprised and pleased to see.

Jubilee
Alternative procedures
Real conservatism and rent control
Do androids dream of electric justice?
The ritual function of the Olympics
Nobel prize in anarchy
The sacred state
Joining the celebration

The organization of nonviolence
Nonviolence entrepeneurs

Nobody believes in embryonic personhood
Are Palestinians people?
The psychic unity of mankind

Mind of society, society of mind

Proteus
What cannot be said

My post on Phil Agre got linked from some popular sites and thus got a couple orders of magnitude more views than is usual.

A posting from this blog was cited in an actual journal article: Networks and cronyism: A social exchange analysis, Thomas M. Begley, Naresh Khatri, and Eric W. K. Tsang, Asia Pacific Journal of Management, March 2009. It's paywalled but you can download the first page for free. Seems like an interesting article.
Posted by mtraven at 12:11 AM No comments:

Email ThisBlogThis!Share to TwitterShare to FacebookShare to Pinterest
Labels: review

Although not a Christian or even close, I can take some recognizance of what the day is supposed to be celebrating -- the entry of the divine into the world in a radically new form. This is apparently a very powerful idea. Some possible responses:

I'm going to a lot of (3) (in fact, I'm going to take the kids to see Avatar which I just realized is mildly amusing in the context of this blog post). I've been raised to be allergic to Christianity. But using my finely honed powers of abstraction, I can also take some time to appreciate the underlying metaphysical ideas, which are different from the messy and sorry actual history of Christianity as an institution. It's a twisty kind of irony since Christianity is about the realization of a mighty divine abstraction in the concrete flesh of Palestine year zero.

Is all of human intellectual history an effort to bridge this gap between abstract and concrete? AI and cognitive science are the latest attempt, not really very successful ones in my estimation. We've found ways to make the word into electronic flesh through symbolic computation, but have not come close to doing the same for the spirit. Whatever that is.

Previous birthday wishes.
Posted by mtraven at 10:25 AM No comments:

Here's a high-minded top-ten list: "The 10 most pressing philosophical issues of the 21st Century". Let's overlook the somewhat oxymoronic notion of a "pressing" philosophical problem -- any issue that is actually pressing is not going to be waiting on philosophers for a solution. I guess it's somewhat charming that philosophers think they are that important.

10. Finding a new basis for common sensibilities and common values.
9. Finding a new basis for social identification.
8. The Mind-Body problem.
7. Can freedom survive the onslaught of science?
6. Information and misinformation in the information age.
5. Intellectual property, in the age of remix culture.
4. New models of collective decision making and collective rationality.
3. What is a person?
2. Humans and the environment.
1. Global Justice.

And here's my breakdown:

10, 9: 1 seem to be essentially the same, or at least closely related. All are driven by globalization, the progressive kniitting-together of disparate cultures by technology and commerce. All seem to center around the nagging contradiction at the heart of liberalism; the idea that there must be a neutral public sphere and people's deepest moral commitments are relegated to private or semi-private space; resulting in the paradox of having to tolerate the intolerant. How do people and communities with different sets of values coexist? Good questions, and I can believe that philosophers have something to contribute here.

8,7: are chestnuts that philosophy has made no progress on in hundreds of years and there is no reason to think that they will do any better in the future. Also, what exactly is pressing about them?

6,5,4: are very interesting and important issues but not very philosophical. They will be dealt with by economists, lawyers, techies, and media designers. The answers will be on the order of "Google PageRank" and "Wikipedia" and "Facebook": new forms of social media, possibly linked to new structures of governance. Philosophy has little to contribute, sorry.

3: Good question, one where I suppose philosophy may be able to say something, because personhood is socially defined, not a biological property. Although I think sociology and science fiction (particularly Phil Dick and Octavia Butler) have done a better job of addressing it.

2: What was the question? Yes, certainly we need to become more cognizant of the environment and our relation to it, but that's a job for scientists and the environmental movement. Not sure what philosophers have to do with it.

Honestly I'm not nearly in touch enough with the actual practice of modern philosophy to judge it. It seems that most branches of philosophy are constructed to explicitly avoid making any progress. I guess I believe that philosophy should be in the business of examining and improving the world's assumptions and abstractions. An obviously important task. But what counts as an improvement? If they are the watchmen of thought, who watches the watchmen?

Email ThisBlogThis!Share to TwitterShare to FacebookShare to Pinterest
Labels: philosophy

For some reason these two bits of intel on Afghanistan seemed worth putting side by side.

First: Afghanistan is not a country; but a collection of tribal areas. It may be defined as that part of central Asia that has historically been resistant to conquest by empires. One unifying factor is that most of the men are constantly stoned on the locally produced high-potency opium and hashish.

(via Digby) Is this accurate? Dunno, sounds plausible, if I had to live in the Afghan tribal areas I'd probably want to be high most of the time. On the other hand, it's hard to square this picture with the Afghani's reputation as fierce fighters.

So, that's a view of Afgahnistan from the ground level. Meanwhile, perched on the commanding heights of a modern-day massive bureaucratic war machine, the American would-be benevolent rulers get high on insane business graphics (via Yglesisias). Something this fucked up could only be generated by people who were huffing too much white-board marker fumes.

Full PDF report here. I have an ongoing debate with a colleague about the value of graphics and visualizations, including some tangled network diagrams like this which are common in systems biology. I'm generally pro-pretty-pictures, but this is a great piece of evidence for his side. Measurement is pretty tricky in biological systems, but at least you know there is something real going on that could in theory be measured, like the amount of mRNA being made off a particular gene. In this chart, you have somthing like "coalition force density" -- which presumably could be an objective number, albeit not a very meaningful one -- is combined with variables like "indivdual competence, judgement, and ability to execute" and "ANSF Corruption & Tribal Favoritism", which can't possibly be defined tightly enough to be measured. So what is the point of this, other than to highlight what a hopless morass fighting a counterinsurgency warfare in mountainous country half a world away where we don't speak the language, understand the culture, or have an idea for an endpoint or exit strategy? None of those arrows point to an exit.
Posted by mtraven at 12:04 PM No comments:

Parapolitical violence notes from all over

Here's a promising trend: domestic counterinsurgency warfare. Salinas, CA, previously best known for being John Steinbeck's hometown, apparently has a ridiculously bad gang problem. Its homicide rate is three times the national average. It's a war zone out there! So they've called upon the experts to deal with it:


Since February combat veterans of Iraq and Afghanistan have been advising Salinas police on counterinsurgency doctrine, bringing lessons from the battlefield to the meanest streets in an American city: "It'™s a little laboratory," said retired Col. Hy Rothstein, the former Army career officer in Special Forces who heads the team of 15 faculty members and students (from the Naval Postgraduate School), mostly naval officers

Leonard A. Ferrari, provost of the naval Postgraduate School, embraced the project from the start, hearing an opportunity for a school in transition from just a defense institution to a national homeland and even a human security institution.


The Naval Postgraduate School is a DOD institution, part of the U.S. government. Its involvement in Salinas marks the federal government'™s formal recognition of Fourth Generation war on American soil, and the need for a  œnational model   to counteract it. If we must involve the U.S. military to lead counterinsurgency efforts in American cities, then it is difficult to deny that we face something like insurgencies in those same cities.

It recalls to mind an earlier flamewar I participated in, where I (in quasi-anarchist mode) tried to convince some wingers that there was no fundamental difference between General Petraeus and a Chicago gang leader. This line of argument went nowhere, despite the venue proudly proclaiming its refusal to be sentimental about the uses of political violence.

On a rather different note, Goldman-Sachs honchos are apparently stocking up on firearms in case the proles start to get any ideas (via Taibbi).

Also, Digby explains very slowly to a conservacretin why it might actually be in his self-interest to support the distribution of food stamps.

Are these signs of a more general fraying-at-the-edges of the existing order? Who knows. I don't mean to sound the least bit celebratory of this sort of stuff, but given the certainty that the US will be continuing to contribute to violence and chaos abroad for the foreseeable future, having some at home seems both just and possibly even corrective over the long term.
Posted by mtraven at 3:26 PM 1 comment: