The Opposite of Science

I՚m as happy as anyone to see thousands of people in the street marching in support of science, but something about it feels kind of strange – like, should science really be a political cause? 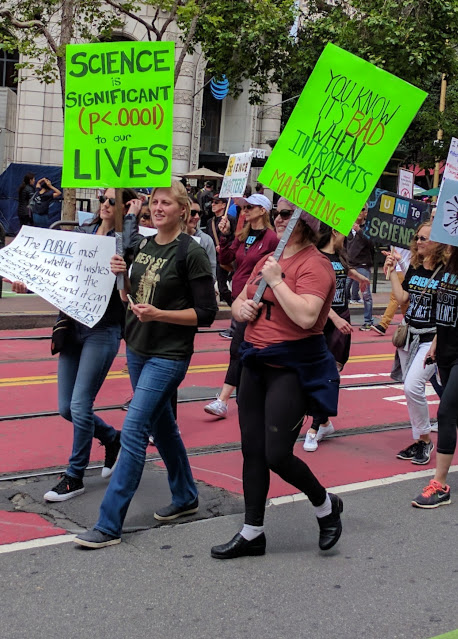 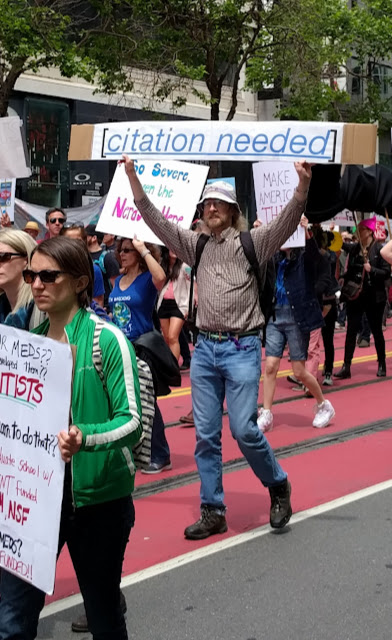 The first answer that comes to mind: of course is no, it shouldn՚t be, but the right wing crazies have forced it to be one. The onus is on them.

The second (and a bit more sophisticated) one: yes, of course, science and rationality (and the modern cosmopolitan civilizations that make them possible) are as historical, and hence political, as anything else. Science didn՚t just blossom innocently into existence in the modern era, it was advanced by specific agencies and interests, and opposed by others. It՚s a bit sad and a bit annoying that this battle hasn՚t been won decisively, but not exactly surprising. So this is just a new stage of a long battle.

There weren՚t any visible counterprotestors at the Science Day march, although plenty of mention of Donald Trump, now the leader of the rightist forces of unreason.

The first obvious enemy of science was religion. While the Catholic Church has long made its peace with science, religious fundamentalism quite rightly sees science as undermining its metaphysics and has opposed it fairly continuously in the US for the past century..

Big business and its libertarian ideological handmaids, who turn against science because it interferes with their profit making. This is the most powerful of the anti-science forces because it has money behind it, and it՚s main effects have been to ensure that we continue to doom ourselves via the climate.

Ethnonationalism – Science by its nature is universalist – it is a machine for producing truths that ideally independent of specific context. This is a tricky and sensitive point, because it doesn՚t mean that science necessarily proves human universalism – “human biodiversity” may be real, although it՚s a suspicious and fringy area. But the practice of science has a very strong universalist bias, in that research results and practises from the US or Peru or Peking are expected to be fully compatible with each other. Trump՚s hamhanded attempts to block immigrants have had a very tangible negative impact on scientific practice.

On the left (more or less), enemies of science are usually motivated by some form of conspiracism or health paranoia (eg anti-vaxxers). William Burroughs made this point with characteristic clarity and extremism. way back in 1961:


The whole point is, I feel the machine should be eliminated. Now that it has served its purpose of alerting us to the dangers of machine control. Elimination of all natural sciences. If anybody ought to go to the extermination chambers definitely scientists, yes I’m definitely anti-scientist because I feel that science represents a conspiracy to impose as, the real and only universe, the Universe of scientists themselves - they’re reality-addicts, they’ve got to have things so real so they can get their hands on it. We have a great elaborate machine which I feel has to be completely dismantled in order to do that we need people who understand how the machine works - the mass media - unparalleled opportunity.

Science has had a varied political career, as it makes its necessary alliances with political and worldly power. It՚s always been hand in glove with the military, for obvious reasons. And its served capitalism and corporations, perhaps too well. Doing science takes money, money comes from the powerful, so science has had to make all sorts of alliances with the powerful, including unfortunate relationships with both the Nazis and Stalin. And its enemies have also been scattered across the spectrum.

Who knows what the consequences of this mass politicizing of science will be? And while I am generally in favor of acknowledging political realities, I have to admit that tearing down the walls between science and politics is also scary, even if those walls are thin and built of mere social convention. Science is about truth, politics is about power, and those forces don՚t always work well with each other. But there is no alternative to figuring out how to make that happen.
Posted by mtraven at 10:29 AM 2 comments: