Political symbols are highly charged with sacredness and its opposite. Think of what the red flag and hammer and sickle meant to devoted communists and to their enemies, and still does. Or the swastika, but that՚s almost too powerful to even talk about. The American flag is a sacred symbol to many, and a symbol of violence and oppression to others. All these symbols point both to big abstract ideas and to concrete political formations. They were created in part for this very purpose, to bind people together, to give them something larger than themselves to work towards. And, not accidentally, they also are selective, they attract certain people and label others as outsiders or enemies.

The sacred is nothing without something profane to act as contrastive background. I can think of a few not-very-successful attempts to create political sacred symbols that were supposed to be universal and non-exclusive:

the UN and its iconography

or the Earth flag

These haven՚t really caught on. Their message is slightly obnoxious, to display them says that one is above the tribalism that has everybody else in its grasp. It embodies neatly the inherent contradictions of liberalism, a tribe for the cosmopolitan.

[In the comments to the last post, my pet troll was trying to make me justify my interest in neoreaction. It՚s simply this – it makes me a better liberal. Like any other modern political movement, liberalism is both a set of particular people and values (a tribe) and a universalizing ideology. The trick to not being a mindless liberal is to acknowledge both sides of that contradiction.]

But this post was inspired by something rather less lofty, namely the confederate flag and its prominence in the current political conversation, thanks to the mass killing at an African American church in Charleston, by a young man who was deeply immersed in southern racism. 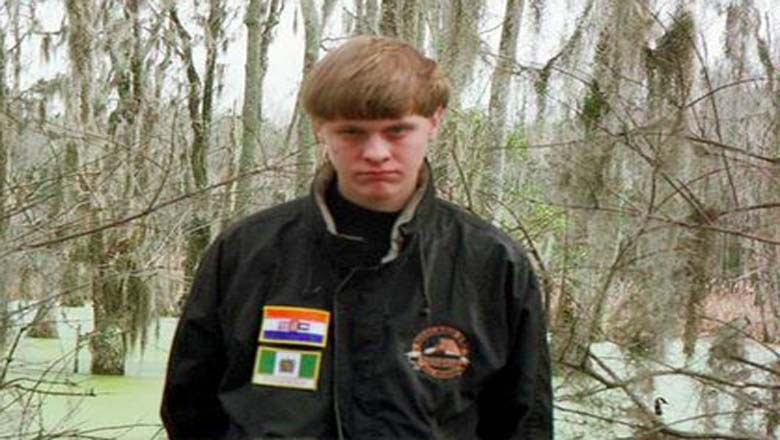 Here Mr. Roof is displaying the flags of Rhodesia, apartheid-era South Africa, and the Confederacy. This has spawned a movement to try to get rid of the confederate flag, seeing as how it is a symbol of racism and treason. Even Mitt Romney is on board.

I have to say that I too am onboard with the efforts to get rid of the confederate flag, especially from official locations like the South Carolina state house. Oddly some of my justifications for this have a neoreactionary flavor. A neoreactionary state clamps down firmly against any kind of political threats to its authority and stability. And it՚s not clear why the United States should allow a symbol of a defeated rebellion against its authority be so prominently displayed. Since I՚m a liberal and not a neoreactionary I think individuals should have the right to display symbols of treason, but if it՚s on proud display by the government, something is profoundly wrong.

Yet I am trying to put myself in the heads of people to whom it is a sacred symbol. People for whom the confederate flag is not a symbol for something foul, but a marker of their highest values: loyalty, tradition, whatever. I don՚t doubt that their attachment to the symbol is genuine, but that doesn՚t redeem it or them in the slightest. They remain the enemy.

How does one deal with an internal enemy? The neoreactionary solution is to annihilate or suppress them completely. The liberal solution, apparently, is to let them go about maintaining their “heritage” and hope they՚ll improve themselves over time. It՚s been 150 years since the civil war, that hasn՚t really seemed to work out very well. Unfortunately conflicts between sacred values can՚t be argued out rationally; they require either battle or separation.

Or maybe that is only a short-term view, a tribal view. Maybe all the tribal battles between groups dedicated to their limited sacred values – their idols – will give way over time to reconciliation under the umbrella of more universal and transcendent values. Just because it՚s harder than the naive folks with their UN and hippie earth flags thought, does not mean it can՚t happen over the long course of time.

I was just talking about nerd politics, and lo and behold, we have a fresh spasm of geek outrage to examine. Strange Loop, a hip technical conference, invited Curtis Yarvin (the real-word persona of Mencius Moldbug, the inventor of neoreaction) to give a talk on his Urbit system. Then, quite rapidly they rescinded the invitation when his political writings came to their attention, causing a fairly major internet fracas. It gave the right a chance to complain about censorship and the puritanical minds of SJWs, and they never pass one of those up.

But they really have no grounds for complaint, because freedom of speech is a liberal value, and Moldbug is quintessentially anti-liberal. From the neoreactionary viewpoint, there is no public sphere, not the streetcorner (which belongs to the monarch) and certainly not a private conference. The owners get to decide what is done with their property and the outrage of the offended non-owners carries no weight at all. And in this case, the owners of the conference decided they didn՚t want to be associated with a purveyor of flagrant racism.

I was kind of on the fence about it myself. On the one hand, I like robust freedom of speech; I dislike the new oversensitivity; and having technical presentations censored because of not-obviously-related political opinions of the presenter seemed like a really bad precedent.

On the other hand, Moldbug՚s opinions really ought to be beyond the pale of polite society. While I wouldn՚t interfere with his rights to post them on his own site, I don՚t think Strange Loop has an obligation to be open to all. Their argument is that hate is different from political opinion, they have a duty and obligation to keep their community friendly, and having Nazi-level crap in the mix might interfere with that job.

On the other other hand, to pretend that there is some categorical difference between hate and politics seems a trifle disingenuous. Hate is pretty fundamental; ideologies or groups in general define themselves in terms of what they hold sacred and its opposite. Moldbug isn՚t any more hateful than the rest of us, he just doesn՚t hate the right things. In the world we live in, hating racism is OK (required even), but hating a race is not.

Some claim he is not a racist, which is ridiculous if you՚ve read any of his stuff. What might be true is that he isn՚t fundamentally motivated by race hatred. If you take him at his word, what he really hates is disorder. Singapore is his ideal, a strong state with clean streets and no messy dissent. This is what makes neoreaction primarily a nerdy antipolitics, whose ideals are more abstract than the more typical loyalties and resentments of the mainstream.

But, while he may not be primarily motivated by race-hatred, he's just perfectly willing to allow racial oppression in the service of maintaining order. That may not be classical racist hate, but it's close enough. One of the Nazi՚s main justifications for their crimes against Jews was order and purity.

On the tactical level, Moldbug has scored a huge win for himself, and Strange Loop shot itself in the foot. He՚s got way more publicity, for both his technical and political work, than if he had given his talk. And now the conference has got a lot of unwelcome attention and associations. It would have been smarter to let him come and publish a disclaimer in the program or something.

Certainly I have been forced again to re-examine my assumptions, to look anew at my own ideas and values and how I defend them against challenges. Moldbug is good medicine for genuine progressives, who more than most have an obligation to think through their beliefs. It՚s strong and possibly toxic medicine, but having your thought congeal into mindless ideology is even more toxic.

[update: someone pointed out that al3x (linked above) is not officially associated with StrangeLoop, and linked a response from one of the actual organizers.]
Posted by mtraven at 8:48 AM 45 comments: