First: I thought I was pretty immune to the oddities and offenses of wingnut thought, but I must say I was taken aback to see people parading around a banner with the word "rape", not to protest it but to celebrate the results of it (via Rachael Maddow):

Have you ever considered how really insulting it is to say to someone, "I think your mother should have been able to abort you."? It's like saying, "If I had my way, you'd be dead right now." And that is the reality with which I live every time someone says they are pro-choice or pro-life "except in cases of rape" because I absolutely would have been aborted if it had been legal in Michigan when I was an unborn child.

Second: OTOH, give them credit for a smidgen of intellectual consistency. If you really believe that any zygote with around 46 chromosomes is a full-fledged person deserving of full legal protection, then why would that protection suddenly be withdrawn just because that person happened to come about as the result of a violent assault? If abortion is murder, then it's murder no matter how the vessel containing the victim might feel about it.

Third: OTOOH, not really. As I've pointed out before, if the proposition above was really adhered to, then the infant mortality rate would about around 50% and we'd be holding funeral services over discarded tampons. [[Update: Guess I'm not the only one to notice that. I think that link is a joke site, but I can't be sure.]]

Alright, all of the above was just an excuse for me to write about a perpetual term that won't leave me alone: personhood, now with its own lobbying group and proposed constitutional amendments. The concept exerts a strange fascination, perhaps because it is obviously a social fiction while at the same time absolutely essential to living life. I wrote my dissertation on a related topic (agency and computation), and apparently that was not enough to get it out of my system.

I suppose it is compensation, or a reflection of a basic maladjustment. I figured out a long time ago that my interest in sociology is directly linked to my difficulties with normal society (to put it simply: being a sociologist is like a fish suddenly noticing that they are swimming in this weird "water" stuff and wanting to have a theory of it – and only a fairly weird fish would feel the need). Personhood is just another aspect of the same dynamic, and no doubt underlying it is that faint trace of Aspergerishness that is so common in my chosen profession.

From my point of view personhood appears to be have maddeningly contrary qualities: fictional yet real, elusive yet mundane, unknowable while necessary.  I don't think a constitutional amendment is going to help.

Transpersonal metacognition: it's on!

I gave myself the fake title "Chair of Transpersonal Metacognition, University of Saskatoon" (on the right column, until I get tired of it and change it) in a fit of amused randomness, but metacognition turns out to be a real thing, if not quite real enough to have its own department yet. I shouldn't be surprised. If I could only take my offhand inventions more seriously maybe I really would be occupying a loftier chair than my decrepit used Aeron.

Anyway, there are over 63K articles returned by Google Scholar with the word "metacognition" in them. The linked one above has lots of intriguing references, like to a study that showed that telling subjects that free will doesn't exist led to more cheating; and research that suggest that metacognition is located in an area of the brain called Bordmann area 10. All of that sounds fascinating but it somehow misses the main point (or at least the point that interests me), it buries the lede, hides the jewel within a bushel of plain oats. That point is that "metacognition" is not some random phenomenon to be isolated and studied, it is very close to the fundamental quality of being human. Somehow turning it into a serious (but ordinary) academic subfield seems to drain it of interest. That is no doubt a problem with me, not with any of the actual work or people working on it.

Metacognition improves upon the completely broken notion of "consciousness". Consciousness is looking at roughly the same phenomenon but in such a way as to make it mysterious. "Consciousness" suggests a magically transcendent form self-knowledge; "metacognition" by contrast suggests that we know ourselves in almost exactly the way we know everything else: partially, murkily, filtered through inadequate representations and built-in biases. We are foreign to ourselves, we take ourselves for objects just like anything else.

What about "transpersonal"? The deep idea there is that our self-cognition and our other-cognition is essentially the same, or at least generated by the roughly the same processes, and we build up our self-image by observing others, and by observing others observing our self. That is to say, our metacognition, even of ourselves, is "transpersonal", which is just another way of stating the conclusion of the preceding paragraph.

Some philosophical works that touch on this: Paul Ricoeur's Oneself as Another, and (in a fairly absurd way) Daniel Kolak's I Am You. Douglas Hofstadter has been obsessed by it in one form or another for decades and in some ways has already exhausted the topic, now that I think about it. Other computational thinkers have tried to create models that embody reflection, introspection, or self-modelling (Brian Cantwell Smith, Jon Doyle, John Batali, Marvin Minsky). But those never seemed to lead anywhere…although apparently there have been AAAI symposia on metacognition, which I am somewhat sorry I never went to (and will likely never, having once more derailed myself off the research track).

This blog post may be a personal apotheosis of meta for me, since it is about (meta) to my own relationship with both the idea of metacognition and the academic instutions of knowledge that study (are meta to) it. And of course that last sentence was one more level of meta, and so is this one.

[And to go meta on a different axis: I'm starting a new job tomorrow so it is likely that this blog might take a turn towards being more about software development and other mundane matters. Or it might get even more random as I use it to vent all the parts of my mind that do not have a professional outlet. Or it might stay just the same, or stop altogether for awhile.]

[And one more: checking my archives, I see I was thinking along much the same lines back the last time I was in the midst of a job change. Scary! Or predictable? I guess it's scarily predictable.]

Posted by mtraven at 9:15 PM No comments:

Portraits of Unicode Characters, #2 of a series — Pile of Poo

As you can see by contrast with the previous entry, the vocabulary of Unicode symbols spans the gamut of human concepts, from the gloriously abstract to the all-too-earthy. However, unlike mathematics where symbolism is in heavy use, and philosophy where it isn't but probably should be, talking about shit is an everyday activity where the use of typographic condensation has heretofor been minimal. And honestly, it kind of misses the point. Part of the point of talking shit about shit and pointing out the bullshit emananting from shitheads is the pleasure of saying the word, molding it to its subject as it were. So substituting a symbol is somewhat unsatisfying.


Like many other misguided efforts at formalization, this seems like it is something of a failure at capturing the richness of the concept that it claims to denote. On the other hand, it is perfect in its crudeness. If it were an elegant symbol then it would be an even bigger failure, but as it is – an unsophisticated pictograph, a rather unwelcome presence amidst all the quietly understated mathematical symbols, an insult to their air of aristocratic disembodiment…yes, it may be the first vanguard of a peasant uprising amidst the typographic populace. Calling bullshit is the first step in developing a more sophisticated form of critique, and feces-flinging is not only an old and noble primate tradition, but apparently an emblem of intelligence.
Posted by mtraven at 8:37 PM No comments:

On the unpower of words

In the East poets are sometimes thrown in prison – a sort of compliment, since it suggests the author has done something at least as real as theft or rape or revolution. Here poets are allowed to publish anything at all – a sort of punishment in effect, prison without walls, without echoes, without palpable existence – shadow-realm of print, or of abstract thought-world without risk or eros. ... America has freedom of speech because all words are considered equally vapid.


[not really inspired by current events, but resonant with this little episode.]
Posted by mtraven at 11:08 AM 4 comments:

A few weeks back I realized that my lightly-disguised pseudonym needed a business card of its own for meetups and other halfhearted attempts to be part of the Bay Area scene.  Here's what I (or he) came up with: 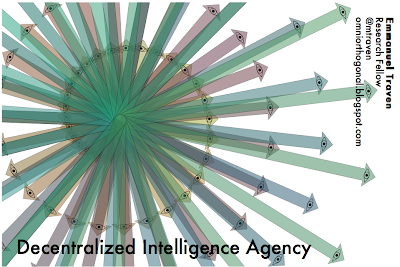 It's procedurally generated so each one has different colors and other variations, which is kind of fun.
Posted by mtraven at 1:58 PM No comments:

For some reason, today I recalled an episode (a recurring episode actually) from childhood that I hadn't thought about in ages.

Imagine myself as a small boychild, smart but hardly differentiated from the world around him.  Raise him in the formica and spaceships and Danish Modern of suburban Chicago, 1965 or so.  Then transplant him to a country inn somewhere in New Hampshire that was full of decrepit German Jews, smelling funny and reading foreign newspapers. This was a vacation trip I was dragged on for some good number of years, as we made an annual pilgrimage to the East Coast to visit my grandparents who lived in Brookline, MA.  They and their friends congregated at this resort called Besin's, which (unlike the rest of my universe) was emphatically not aimed at children.

I honestly have no real memory of what I felt there, but it must of been some mixture of boredom and the sheer stark terror of being in the vicinity of death.  Something a seven-year old would have not the slightest knowledge of, but the quality is of such a magnitude as to be felt in the bones, in the very fabric of the cosmos.

I can't imagine what prompted me to think of these summers of boredom and the nearly dead, except that tomorrow is my last day of work at [prestigious research institution]
Posted by mtraven at 11:48 PM No comments:

Still in the process of leaving my current job; which I decided needed some musical accompaniment:


You just kind of wasted my precious time, but don't think twice it's alright.

Email ThisBlogThis!Share to TwitterShare to FacebookShare to Pinterest
Labels: music, my random career

Darn, came really close to coining the word quasidemic but there are a few existing uses.  Actually they all seem to be copies of this HuffPo article on the Dalai Lama which uses it in hyphenated form, so I am going to claim near-originality here.

Meaning: places like SRI, BBN, PARC, and other non-academic research labs that are or purport to be doing academic sorts of intellectual work.

Considering I have been in and out of these places for many years it is odd that I had to invent a word to describe them. (Currently working on going from in to out, so doing some reflection I guess).

[update: whoops, a Googlewhack is a two-word Google query, so my coinage is closer to a Googlewhackblatt.]
Posted by mtraven at 1:42 PM No comments: