The current apex of human cleverness

may be these unremarkable-looking machines, which are Illumina gene sequencers. The other day I had the pleasure and privilege of getting a tour of the DOE Joint Genome Institute in Walnut Creek, which has 8 of these babies. With these and the other sequencing machines, they sequence well over 100 gigabases of DNA a day. 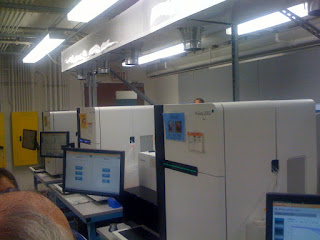 Something about these machines intrigues me, the way they combine the accumulated cleverness of chemistry, optics, lasers, robotics, computation, microfluidics, all in service of gathering even more knowledge. The way they have literally black-boxed these techniques so that the entire astonishingly complex process can be treated conceptually as just one thing (sort of). The way they unite academia, industry, and government efforts, and blur the lines between them. The way all these forces are concentrated serially on the base pairs of a strand of DNA, one little atomic-scale bit at a time, until it's all read. How many people contributed to this concentrated ingenuity in one form or another? It gave me a little burst of the technological sublime.

Apparently the hot thing in genomics now is the ability to read the genomes of individual cells (single-cell genomics). Another little room had the physical device that makes this possible, which takes a drop of cell-containing water and physically breaks it into into tiny droplets with ultrasound, some small fraction of which contain cells, and then plops each of the desirable droplets into wells on a plate through manipulation of electric fields. Then each cell can be separately amplified and sequenced. Before this technique, genomes could only be sequenced from cultured cells, and most organisms can't be cultured.

The good news for me is that while the technology for producing biological data is getting more powerful at faster-than-Moore's-law rates, the ability to interpret it is lagging, which means plenty of opportunity for the software to manage, analyze, interpret, and navigate the deluge.
Posted by mtraven at 8:37 PM No comments:

The most sensible philosophy paper I've read in awhile is about crazyism -- roughly, the idea that any seriously worked-out metaphysics of mind must violate some tenet of common-sense and thus appear "crazy". Or in other words, our minds are not capable of understanding their own fundamental nature. This is The Crazyist Metaphysics of Mind by Eric Schwitzgebel.

Schwitzgebel argues by going through an elaborate and exhaustive taxonomy of Philosophy of Mind theories -- materialism, dualism, idealism, etc, showing that each in some way is both bizarre, ie it violates common sense in some way -- and dubious -- ie, it is not compelling enough to be accepted as true despite its oddity. The combination of these two qualities equals crazy in his terminology. The second clause about dubiosity is there to distinguish metaphysical craziness from scientific theories that, while bizarre enough, have evidence or something else compelling behind them. Eg, quantum mechanics is merely bizarre, because its strangeness can be supported by demonstration and experiment, while the many-worlds interpretation of qm is full-on crazy.

For instance, Schwitzgebel tries to demonstrate that a consistent materialism must grant consciousness to collective entities:


It would be bizarre to suppose that the United States has a stream of conscious experience distinct from the conscious experiences of the people who compose it...Yet it’s unclear by what materialist standard the United States lacks consciousness. Nations, it would seem, represent and self-represent. They respond (semi-) intelligently and self- protectively, in a coordinated way, to opportunities and threats. They gather, store, and manipulate information. They show skillful attunement to environmental inputs in warring and spying on each other. Their subparts (people and subgroups of people) are massively informationally interconnected and mutually dependent, including in incredibly fancy self-regulating feedback loops. These are the kinds of capacities and structures that materialists typically regard as the heart of mentality.

Crazyism is inevitable, he says, because of the manifest inadequacy of common sense in dealing with metaphysics. "Something bizarre must be true about the mind, but which bizarre propositions are the true ones, we are in no good position to know." Crazyism is apparently an extension and partial one-upping of mysterianism, the idea that some phenomena (consciousness) are simply inexplicable due to the limitations of our minds. Mysterians are mostly naturalists, while Schwitzgebel is willing to entertain stranger ideas, and indeed believes one has to.


Common sense is incoherent in matters of metaphysics. Contradictions thus inevitably flow from it, and no coherent metaphysical system can respect it all. Although ordinary common sense serves us fairly well in practical maneuvers throughthe social and physical world, common sense has proven an unreliable guide in cosmology and probability theory and microphysics and neuroscience and macroeconomics and evolutionary biology and structural engineering and medicine and topology. If metaphysics more closely resembles items in the second class than in the first, as it seems to, we might excusably doubt the dependability of common sense as a guide to metaphysics.

After living with this idea for awhile, the more sense it makes to me. The contrary position, that the universe is knowable by common sense down to its foundations, seems simplistic, arrogant, and counter to experience. And Schwitzgebel, in his clever attempts to apply reason at the point where reason breaks down, seems almost Godelian.

[Schwitzgebel has a blog, The Splintered Mind]
Posted by mtraven at 8:20 PM 4 comments: