I am in the process of gently tearing myself loose from the cold gray institutional embrace of my current employer, for the more exciting and remunerative arms of a startup. We are both trying to make it amicable, but in any breakup, it is inevitable that feelings will be hurt and old wounds re-opened.

So I thought I'd reopen one that was from way before my time, just because the episode is so bizarre and it fits in with some other historical reading I'm doing at the moment:


[in 1973] Sarfatti happened to read a story in the San Francisco Examiner about research under way at the Stanford Research Institute, or SRI. SRI, much like defense-oriented laboratories at MIT and elsewhere, had been a flashpoint of student and faculty protest just a few years earlier…Stanford's trustees, eager to quell the protests, spun off SRI as a private research enterprise and divested the university's ties to it…the lean years brought new opportunities for some, including laser physicist and former Stanford lecturer Harold Puthoff. Puthoff … joined SRI in 1969 and left the university the following year, when SRI was spun off; in short order his laser-research government contracts began to deflate. With time on his hands, he asked his SRI supervisor for permission to begin conducting a different set of experiments: tests of parapsychological effects. Puthoff was a devotee of Scientology at the time…He had also dabbled in early rumblings of the California New Age scene during the 1960s, including workshops on gestalt therapy and consciousness expansion…he courted another laser physicist from Sylvania's research laboratory, Russell Targ…Together, they jumped into the psi business.

Their big break came in September 1972, when the Israeli performer Uri Geller visited SRI to conduct laboratory tests of his psychic abilities…

Same place, way different eras. "Consciousness expansion" is right out, for one thing, and apparently for good reason.
Posted by mtraven at 4:56 PM No comments:

Portraits of Unicode Characters, #1 of a series: ⧜ Incomplete Infinity

The Unicode character set is a huge but barely explored extension of what is essentially now the common linguistic matrix of the human race.  It contains every conceivable glyph and symbol, including some rather strange ones that seem to have been inserted in a spirit of philosophy, comedy, or both. This series will examine some of these and what is being done with or could be done with them. 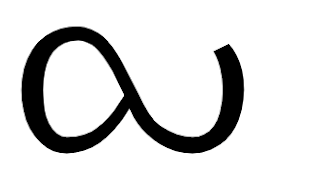 In mathematics, at least, it is an absurd concept.  Or a redundant one ‒ as Cantor showed, any infinite set is incomplete in a sense, because you can always construct a larger one.  But transfinite numbers aside, it doesn't seem to make much sense to talk of an incomplete infinity. A set is finite or it is infinite; there is no in-between.  Very large is not close to infinity and if you take anything away from infinity you are still left with infinity. So there doesn't seem to be anything for "incomplete infinity" to refer to.

But from a non-mathematical perspective, this symbol is just a perfect, its form and name a masterpiece of  compacted metaphysical irony. It is a representation of the human condition - partaking of the infinite, cognizant of the infinite, often driven mad by the infinite, yet irredemiably incomplete and finite.  No matter how much we accumulate, the gap between our finite selves and the infinite is never closed, except perhaps in death.
Posted by mtraven at 5:30 PM No comments:

I find myself spending far more time reading right-wing blogs and such than I really want to. The reasons are somewhat opaque to me, but the situation seems to have some of the qualities of a classic sexual paraphilia. Not that I have much experience in that regard, but the insistent pull of such distasteful people on my attention must be what it is like to, say, have an amputation fetish – something about the sheer awfulness and ugliness of it makes it literally attractive (ie, that it is, it draws my attention, more or less against my will) in a private and inexplicable way. It is both shameful and oddly exciting and those qualities feed on each other.

So during a recent bout of perversity, I came across this rant by Rush Limbaugh that seemed to achieve a certain perfect state of douchebaggery, in that it expressed the exact opposite of what is normally considered decent opinion:


If you don't want to listen, I don't blame you. Here is the meat of it, from around 2:30. He is riffing off of Obama and others making the point that people who get rich don't do it all by themeselves:


This is about a bunch of people that don't count, this is about a bunch of people with meaningless, miserable lives, lying to themselves, trying to tell themselves that they matter. So you have Mr Big Business guy, Mr Wealthy… yeah, well if you did all that, why are you sitting there with nothing? If you made it all happen, how come you've got nothing? This is such a crock, this is a bunch of meaningless people who know that their lives don't count for anything, trying to matter, coming up with this ridiculous philosophy that says that successful people have not done it on their own, successful people only exist because of the nameless faceless real true hard – you know before Marx there was no such thing as class-driven economics. If that guy was aborted, we'd have a whole different world today.

This man hates this country.

The distortions in the above are pretty easy to spot (if you would like it shredded in some detail, see here, particularly the argument over the origins of the internet which is a perennial personal irritant). But of course reason and truth have very little to do with it. I just want to marvel at its utter perfection of a certain quality – hard to say exactly what, but let's call it the resentment of the priveleged at everybody else. It inverts the normal liberal platitudes of caring for the little guy, of the democratic notion that every person is worthwhile.

Now, there is in fact something wrong with such liberal platitudes, after all – because we aren't all equal and everyone knows it, but it is not polite to say so. The standards that require us to value all people everywhere just because they are people are (in their naive interpretation, at least) are impossible to meet, and thus everyone is forced to be at least a minor hypocrite. Conservatives chafe under this burden, they thrive on imagined rebellion against their liberal moral overlords. So Rush appears to them as someone who can speak truth to "power", but in such a way as to reinforce the real power of the dominant.

Still, it is a little hard for me to see who exactly is supposed to buy this kind of thing. His audience is not the actually powerful, for the most part. The I've-got-mine-jack and screw-the-little-guy routine would seem to alienate anybody who has to work for someone else for a living, and has even rudimentary intelligence. It must be part of his magic to somehow polish up the resentments of the putzes who listen to him – I'm picturing them as the lower quartile of white working class men, but who knows – and somehow unites them on an emotional level with the resentments of the rich.

This is the core emotional move of the Republican party, and we are fortunate perhaps that they've chosed as their presedential candidate perhaps the person least capable of pulling it off. Romney is almost a caricature of the out-of-touch monied aristocrat, and one who apparently achieved his wealth through a combination of birth and looting. It's a little hard to pose as a job creator after running a bust-out operation that would make Tony Soprano jealous.

Politics involves the social mobilization of emotions, resulting in some of the best and (more commonly) worst that humanity is capable of, empathy and loyalty and resentment and hate. I guess I don't blame those who avoid it entirely, but I don't think that is really an option for a fully functioning person – it pervades our lives, just like economics, whether we want it or not.

So, again I ask myself why I bother with the worst of the worst like Limbaugh. It may indeed be a kind of mental perversion, but perhaps what I am trying to do is invert some of the emotional dynamics of politics. That is, the normal thing for me to do would be to join with other people who I mostly agree (progressives) with and jointly get angry at the people we don't like and talk about how they are ruining the country. This is such a normal mode of small talk, especially in the Bay Area circles I travel in, that it is of almost zero interest to me, even if it builds solidarity and sometimes even leads to action. No, I'd rather read the wingers where I am the object rather than the agent of hatred, resentment, or just dislike. That gives me a little thrill of the forbidden, of darkness, of discomfort. But like any perversion, the minor thrill soon degenerates to a mere mechanical response.

A few years ago I made a little browser extension hack that would show you incoming links to each page that you visited. It was kind of crude, and eventually stopped working as the browsers evolved and the underlying service went away.


So, I've made a new version. This one is a proper extension (for Chrome, the browser of choice at the moment), looks and works better, and uses a different service. Please to enjoy; feedback is welcome. I've found it adds an interesting new dimension to web browsing.