The Pull of the Man

So I՚m not going to Burning Man this year, for various lame reasons. But I feel myself pulled towards it nonetheless, in a weird way that is not exactly wanting in the normal sense. I guess I do want to go again, but I՚m not completely sure why – sure, it՚s a hell of a fun party, but I՚m not that much of a party person. The art is spectactular, but art is not usually capable of motivating me to travel so far from the comforts of home. The political aspect of it – the gifting economy, the sense of collectively building a workable temporary utopia – has a lot of appeal, but it՚s hard to see what it has to do with the power structures of the default world, and politics without real stakes is an unredeemable waste of time. There are a ton of interesting weirdos to meet there, but those connections too don՚t seem to travel back into the default world. I certainly had some worthwhile and unique experiences, but for the most part felt kind of out of it – too old, too asocial, too square, too intellectual, and without access to the right kinds of creative power that would enable me to go beyond spectator status. And it really is not a place for spectators.

Yet still I feel oddly drawn towards it, and I probably can՚t adequately convey the nature of that oddness. After all, it is not so odd to want to go to Burning Man. I assume I am pulled in by forces that are similarly acting on all the 80,000 or so people who are there, as well as those like me who are just dreaming of it. But what is the nature of those forces? They are no doubt various and ill-defined, yet somehow they have sustained the event for 30 years, an incredible length of time for a something like this to persist.

One of my kids asked me the other day about the Grateful Dead concerts I went to in my youth – what did I actually do there? He seemed to be after a deeper answer than “go nuts and have fun” – probably he takes me more seriously than I do myself. And truly, that answer isn՚t satisfactory even to me. I was looking for something larger then that, although I couldn՚t say exactly what. And it՚s not just me, everybody goes to concerts and other happenings or public events because they fill deep and usually unarticulated emotional needs – for meaning, for community, for beauty, for access to the sorts of things that tend to get left out of life under late capitalism.

There is a ritual nature to these events. A ritual, broadly speaking, exists any time humans come together around some shared focus of attention. Every random concert or performance has something of the ritual about it, but Burning Man is more explicit about its ritual structure, from its physical layout to its practices. Black Rock City is arranged in concentric circles, surrounding a mostly empty circle of desert, and directly in the center the Man himself. 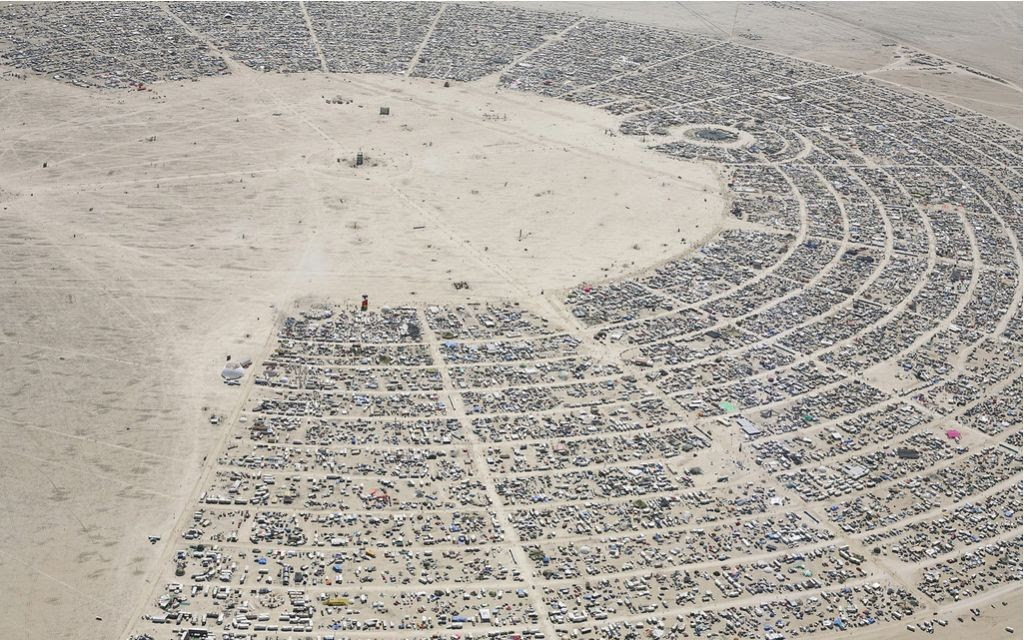 There are some other centers of attraction in the layout, such as a cafe/community center ( a center for talks, small-scale performnances of the hippie arts and the like, and one of the very few places you can spend money). Another is the Temple, which is more for silent contemplation and connection to the higher powers. These two and centers and the main center, the Man himself, are laid out on a central axis.

I have to admit I spent an awful lot of time at the Temple during my one burn – that wouldn՚t have been my conscious choice, there were plenty more fun or interesting places to be than that, but that is where I felt myself pulled. The Man and the Temple are both burned towards the end of the Burning Man week, which determines the temporal side of the large-scale structure of the Burning Man ritual. And, of course, it has the nature of a sacrifice.

Sarah Perry recently published a useful summary of some functionalist approaches to ritual. Such theories are all very well and I՚ve spun them myself, but they are kind of mechanistic and feel external to the phenomenon they are trying to describe. They can explain from an evolutionary standpoint why rituals exist, but they can՚t convey what they are like. Yes, people may perform sacrificial rituals in order to signal commitment and gain status – but that is probably not what they are thinking and feeling while they are doing it. If they are, it isn՚t working – something designed to be directed at lofty communal goals is being perverted into base, greedy, individualistic goals.

And who knows, maybe the vast majority of religious display is infected with this sort of egotistic hypocrisy, but I can՚t believe that it all is. Perhaps I am naive, but it seems to me that people are often quite sincere in their displays of religious enthusiasm – that is, they actually want to participate, they want to be directed at something outside of and higher than their usual concerns, and they are drawn into the ritual based on its nature and their own, not by external compulsions or calculations. Since people are not naturally going to stop engaging in egotistic calculations, part of an effective ritual is that it breaks down individuality. This condition is both terrifying and desirable, and this contradiction underlies some of the weird dynamics of ritual and religion.

It is this desire for transcendence that strikes me as somewhat mysterious, at least in my own case. This mysterious attraction appears to be spiritual in nature. I really hate to use that word, my self-image rejects it. It՚s embarrassing to find myself longing for spiritual experience, to want to be in the sort of place and state of mind in which the individual ego gives way, where the infinite contacts the finite, where the ineffable expresses itself. Such desires don՚t fit in with my self-conception as a realist, pragmatist, materialist, member in good standing of the techno-intelligentsia, and general competent adult.

Maybe It՚s not the spirituality that is embarassing – after all this is California in the 21st century, and everyone is permitted, if not actively encouraged, to engage in all manner of practices. No, it is the longing that is vaguely shameful – at my age, I should just go after what I want, or give it up, all this mooning after the impossible-to-get seems juvenile, especially in the land of do-as-you-please.


But I don՚t think my feelings and reactions are anything out of the ordinary. I may be more conscious of them than normal people, for a variety of reasons, but that doesn՚t make them special. So I conjecture that rituals are structured in such a way as to focus people՚s attention and desire onto something transcendent, that is, something not quite real in the ordinary sense, and thus not really attainable. Longing is built-in to the structure of the sacred.

And if something shameful adheres to the notion of longing, at least a ritual allows people to do it collectively, to align their longings with that of others. Individual longing may be a puerile waste of time; collective longing defines a culture.

[My earlier trip report and an alternative, less weighty view of the nature of the event.]

Posted by mtraven at 1:11 PM 6 comments: Links to this post

So I tried to engage with a bunch of Trump supporters at one of the wingnut websites I occasionally frequent [sorry no link]. Kind of thought of it as a civic duty. Unfortunately all I have to report back is basically what I knew going in. These people are:
This last point of course means that whatever Trump՚s flaws, he appears to be the better alternative to them. So pointing out Trump՚s near-total ignorance, his vile personality, his fraudulent background, and his absurd and destructive proposals means nothing. They claim to be conservatives but are willing to take the risk of vast destruction of our existing system of governance, simply out of hatred for someone who exemplifies the existing system.

These people are lost to sanity, and all we can do is hope that they aren՚t a very big or influential group come November.

[addendum: I don't think I did a very good job of doing what needs to be done -- that is, getting some kind of sense of what these people are really about. That is (a) hard to do on the internet as opposed to f2f and (b) probably better accomplished by people with more empathic skills than me. Here's George Saunders, who normally writes fiction about the broken people of the modern world, giving it a go.]
Posted by mtraven at 11:55 PM 5 comments: Links to this post