I tried taking my anti-anti-politics line on the road at a SlateStarCodex thread about the Moldbug/LambdaConf controversy, with predictably unsatisfactory results. Nobody there likes politics, which they identify with undeserving authority, dreary conformity, and a general low level of intelligence. With some justification! Politics is a noisy, messy, and often uninspiring and unproductive affair.

So, why can՚t some places be politics-free zones? In particular, a technical conference, which is about programming languages and algorithms and such? Why can՚t we pursue our quasi-mathematical pastime in peace, isolated from the noisy conflicts of the regular world? Surely we don՚t want to corrupt our ethereal intellectual domain with such mundane gubbish. The technical world should be a politics-free zone, driven by more noble and intellectual motives than the crass social power that is the currency of politics.

Sounds good, doesn՚t it? In this light, the disinvitation and boycotts that have greeted Curtis Yarvin (aka Mencius Moldbug՚s) attempt to present his work on Urbit are awful, a scary intrusion of group hostility into what should be a peaceable world of pure thought.

Unfortunately such an argument collapses totally on contact with reality. The presentation in question is about a piece of technology explicitly crafted towards a political end. There՚s nothing wrong with that, and it actually sounds kind of interesting. If I were running a conference I՚d let the guy speak, all else being equal. However, to claim that politics wasn՚t involved in this matter until those mean SJWs started a harassment campaign is fucking nonsense.

More broadly, there՚s no such thing as a politics-free zone. We are political creatures and anytime a bunch of us get together there is politics involved, whether it is the local kind of who is in charge of what or the broader kinds of group interest. That՚s life. If somebody claims to eschew politics, what they really mean is that they accept the current structure of power and don՚t want to be overly troubled by how it got that way or any efforts to change it, which, sad to say, is itself a political position.

This is especially true of computer systems and the ideas and designs underlying them, at this stage of history. These are no longer amusing toys for nerds, they are the cognitive, social, and economic infrastructure of the entire world. Of course they are political! How could they not be? And of course politics shaped the history and development of computers from the very beginning. This is why I keep harping on this point, if nerds don՚t think adequately about the political dimensions of what they do they are abdicating their responsibilities.

One other important point about this affair that seems to get lost in the noise (and then maybe I can forget about it, it՚s starting to bore the pants off of me): nobody has threatened to censor Yarvin՚s ideas. They are all readily available on the net, nobody (as far as I know) has tried to pressure Google to take down his blog or Github to take down his code. People are not censoring him, they are refusing to associate with him, which may not be nice but is a pretty normal and accepted form of political speech.
Posted by mtraven at 4:58 PM 20 comments:

Yesterday was Autisim Awareness Day and some people have suggested that “autistic” not be used as a derogatory term either for people or ideas. I՚m guilty of doing that, although not as often as I would have thought. They are probably right and I should stop.

In my defense:
There are obvious problems with labeling ideas or worldviews as autistic. For one, autism as a syndrome has an extremely wide variety of expression. Very few people with autism start political ideologies or movements around their thinking. But it՚s a problem, because I do believe that my non-medical usage of the word denotes something real and important, and I can՚t think of a better way to describe it. Roughly, what I mean is “disdain of or distrust of or incompetance at normal human social interaction, coupled with a fondness and competence for abstractions and artificial formal systems”. This is a common feature of autism but is not identical with it and deserves its own designation. I՚ll call it a* for now (not to be confused with the graph search algorithm of the same name).

Why is it so important to have a designator for a* thinking? It has informed computation since its origins (Turing had classic signs) and is obviously endemic in the present-day technology industry, and that industry is in the process of “eating the world”. We are all living more and more of our lives inside systems designed with a bias towards a*. So unless you are a digital luddite you owe a lot to a*, all the wonderful information and interactions you have on the internet can be traced to these weird obsessives plying their talents towards abstraction.

On the other hand, let՚s take two example of where a* thinking may have some negative consequences.

Facebook is now in control of a large fraction of our social lives, and Facebook is a* in spades. There՚s nothing inevitable that says that the complexities of social interaction have to be reduced to a formal graph of “likes”, but that՚s what we have now. It՚s not so much that Facebook is bad, but that we are allowing the very fundamental structures of society to be redesigned by people who may not be the best suited to it.

On a lesser scale, Moldbug՚s thinking is an exemplary illusstration of a* thinking and its pitfalls. If you study his work in-depth (not recommended) it is clear his primary motive isn՚t racism or ethnoationalism, but a horror of conflict and uncertainty. Ordinary society and politics involves both vague boundaries of groups, imperfect mechanisms of control, and internal and external conflict between different centers of power. Moldbug՚s dream is to replace this mess with something well-engineered and clear, so that for any resource x, there is always exactly one agent a who controls it absolutely. This is not the place to examine this idea on its merits, just to notice that it՚s exactly the sort of thing that would be dreamed up by someone who sucks at navigating actual social structures but is great at constructing abstract systems.

To summarize: I would argue that a* thinking is a real phenomenon and an important one. That it has deep consequences for society which need to be understood better. Finally, it is not necessarily a bad thing if social life is changing in an a* direction, given how fucked up the default world is, but we ought to have better awareness of what is going on.

[ and here is one of my better guest posts at Ribbonfarm where I dive a little deeper into the a* mindset and what it means. ]
Posted by mtraven at 12:27 PM 2 comments:

Here is a very common visual cliche that oddly doesn՚t seem to have an actual name (the title is best I could come up with): 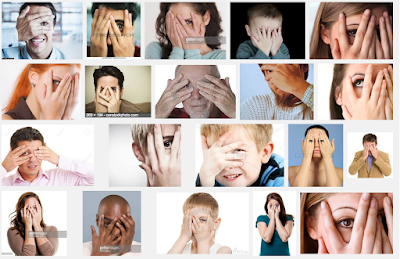 There are hundreds of stock photos and movie stills in which someone simultanously covers their eyes and peeks through the fingers. What kind of sights can provke such a strange reaction, and what could be its function or meaning? Some prospects simultaneously draw one՚s attention and repel it, giving rise to an internal conflict. You shield yourself from the thing (but not in any truly effective way) and then undermine your own act. Who is supposed to be fooled by this looking-while-not-looking? If it was just a matter of modulating a disturbing incoming visual signal, surely the eyelids would do as good a job as the fingers?

It seems to be a clear outward form of an inner conflct, and inner conflicts are always interesting because they reveal something of the structure of the mind (a jumping off point for Freud, Tinbergen, Minsky, and Ainslie, to name only the most influential).

The conflict between fascination and horror comes up in my thinking a lot these days. I detect it in my attitude to onrushing catastrophes like climate change, or the Trump ascendency, or the aftermath of various natural or manmade calamities. And in my otherwise inexplicable fascination with neoreaction and other wingnutty emanations on the internet, which is sort of like a slow-motion trainwreck of the intellect. Or doom in general, which was a founding theme of this blog. My mind is drawn irresistably to such topics, then forced to draw back.

There՚s something almost shameful and twisted about it, although I can՚t quite say why. At least I՚m not alone in having this perverted attraction towards the repulsive. The entire US media apparatus seems to be in this kind of relationship with Trump, both horrified and addicted to the spectacle.

In my defense, I don՚t think the alternative of pretending these looming horrors don՚t exist is any better. It seems almost impossible to face them squarely, so this kind of half-assed playful attitude is probably the best I can do.