Flashing for the refugees

My parents both entered the US as refugees from Nazi Europe, My mother and her family were from Nuremberg and got out via the UK. Here՚s the passenger manifest from their trip from Liverpool to the US in 1940.

And here՚s her passport from Nazi Germany: 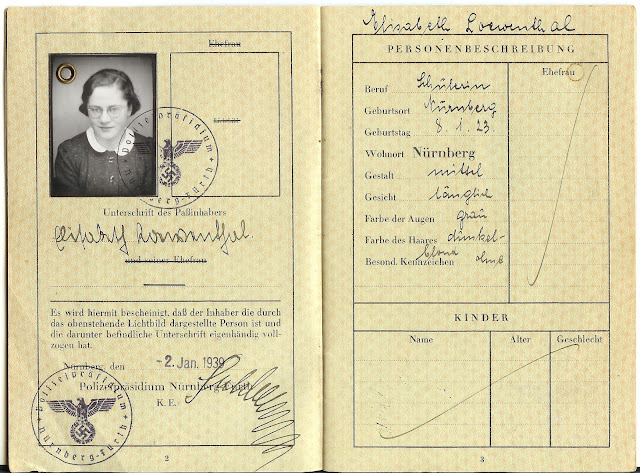 Trump, because there's no level of cartoon villainy too farfetched for him to play to, chose International Holocaust Remembrance Day to announce a ban on admitting any refugees to the US.

The calamity that is his presidency is starting to impact real, specific people, in addition to irreparably damaging the world standing of the US. Sorry refugees, in addition to having your home destroyed, you now have your fate dangling at the whim of an ignorant and narcissistic sociopath, which the US – occasionally advertising itself as a beacon of freedom and hope for the world – decided to elect as its leader.

Oh well I never much believed in countries and governments anyway. The values of freedom and humanity are real enough, but I don՚t really expect states to embody them consistently. Now that we've decided to turn ours into complete shit, they will have to manifest themselves through other means. I support the International Rescue Committee, please consider doing the same.

I am always fascinated by controversies around the border between speech and action – like the fracas about banning Moldbug from a conference, and the more recent punching of alt.right leader Richard Spencer that has been both celebrated and deplored across the internet. It made the front page of the freaking New York Times.


As with the earlier controversy, there are scads of people on both sides who are firmly convinced of their correctness. But to me, it՚s interesting precisely because I can՚t make up my mind about how to feel.


Basically I have two conflicting reactions. The immediate and primal one is: these people are simply fucking evil, they advocate violence to others, most definitely including me and mine, and thus they deserve whatever shit rains down on them. Punch away. It helps that Spencer is practically the Platonic ideal of backpfeifengesicht.

The second is: violence is bad, having a robust definition of free speech is good, and political speech should be defended even when it is vile. The paradigm case here is when the ACLU defended the rights of neonazis to march through Skokie (next door to where I grew up as it happens). The organization՚s devotion to its principles impressed me a lot at the time, especially since it cost them a lot of members and funding.

There՚s a lot to be said for the second reaction. It seems more principled, and based on a more abstract idea of human behavior and thus influenced by what David Chapman calls the systemic mode, whereas the first reaction is pretty visceral and tribal. In the more developed systemic way of thinking, we can recognize that the principle of free speech are more important than the particular uses, good or bad, to which it is put.

But I find myself unable to give myself wholeheartedly to this systemic stance. I can՚t bring myself to tell someone who wants to punch a Nazi that it՚s wrong, because of some abstraction. I wish I could, because the liberal model of political order and political discourse is very appealing. I wish I could be a free speech absolutist like the recently deceased Nat Hentoff, exemplar of the old-school liberal tradition.

Something about that stance strikes me as an obsolete fiction, one that maybe used to work fairly well but is crumbling at the edges these days. It՚s fundamental flaw is that it is based on a the idea that speech can be rigorously separable from action. While a useful fiction, it was never actually the truth, and in our postmodern condition it seems even less true than before.

The systemic rationalism that grounds out the idea of freedom speech is being eaten from the left by Foucauldian critical theory and anticolonialism, which reveals that discourse is never really a neutral player in power dynamics. It՚s being eaten from the right by the rise of ethno-nationalism (Trump, Brexit, etc) and their skillful manipulations of social media. And it՚s being eaten from the inside by the failure of global neoliberalism to control and channel the enormous energies of capitalism in a way that preserves the planet and human livelihood, and by ongoing failure of our institutions of discourse, such as congress and the press.

All of these factors combine to make the old model, of a separate sphere of discourse where ideas are rationally considered and debated, simply irrelevant. It was a nice idea, but the world has moved on. Speech isn՚t about rational discourse, it՚s about whoever can craft the best memes and capture people՚s attention long enough to sell them something.

Both the Nazis and the Nazi-punchers live in this new world. As kind of an old-fashioned liberal myself, I don՚t much like it but I have to acknowledge it. Politics is everywhere, and politics is a contest of strength, and the rules of combat are weak or nonexistent. Violent ideologies generate violent responses -- to wring hands about this fact, to attempt to sit on the sidelines, is a moral cop-out.

And to assume that your own life is somehow outside of and immune to the violence of political struggle is to be unforgivably naive; the worst form of privilege,