I missed my traditional Fake Labor Day post last year thanks to Burning Man, which seems somehow appropriate. Burning Man is many things, and one of those things is is a deliberate celebration of unalienated labor. The amount of effort that goes into the production of all the spectacle is truly astonishing, and it՚s all done for some reason other than the normal economic ones. Yet it certainly is a kind of work. If your work is your own you don't need a day off from it to celebrate yourself.

So what is labor? Making art is labor, so is mining coal or working as a cashier at Arby՚s, and maybe even writing these blog posts. It՚s a very expansive term, almost to the point that it is hard to say what human activity isn՚t labor. Lying on the couch watching TV? But even that involves some level of engagement, there is no such thing as purely passive ingestion of content.

Here՚s the best definition I can come up with off the top of my head: Labor is the focused application of intelligent action to a goal-directed task that engages with the world.

It՚s vaguely Marxist concept, I guess. I՚m not a scholar of such things and am not about to become one, I՚m just trying to tease out this sense I have that there is something about this conception of labor that is powerful and valuable. It՚s too bad that the philosophical ideas are so thorougly contaminated with the manifest failures that ensued when they have been put into political practice.

Marx viewed labor as one of the essential defining qualities of humanity, that which distinguishes humans from animals:


For labor, life activity, productive life itself, appears to man in the first place merely as a means of satisfying a need – the need to maintain physical existence. Yet the productive life is the life of the species. It is life-engendering life. …

The word “labor” points to a certain view of the relationship between mind and world. Vaguely similar concepts from philosophy of mind like “embodiment” have a bit of a Marxist tinge to them, whether or not this is made explicit. All these ideas seem to be working against what might be called the Cartesian/computational default model of the mind, a symbol procesor in a box that only incidentally interacts with the outside world through narrow channels of perception and action.

Marxism has rather famously failed, and as far as I know all the efforts to reform AI and philosophy of mind through embodiied or situated approaches also failed. Perhaps they are all just completely wrong, but I actually don՚t think so. Their critiques were incisive, but their solutions were naive, half-baked, or perhaps just premature. It still seems to me that the way into the future requires both less alienating ways to organize human labor and better ways for computational systems to take on some of the real qualities that make human labor possible.

Posted by mtraven at 8:17 PM No comments:

What are the politics of Burning Man? This article claims the event is perniciously libertarian, despite a veneer of communal rhetoric and practices. As you can imagine, that caught my attention, since it arose conflicting passions. I՚m as persistently anti-libertarian as anybody, yet I kind of dug Burning Man, and didn՚t detect any of the things I hate about libertarianism there. There was a capitalist camp, but despite its name it didn՚t seem very paradigmatic of Burning Man as a whole, and in fact they spend a lot of energy apologizing about how they conflict with BM principles. The Black Rock Census says there are about 3 times as many Democrats as Republicans and Libertarians combined, as one might expect. 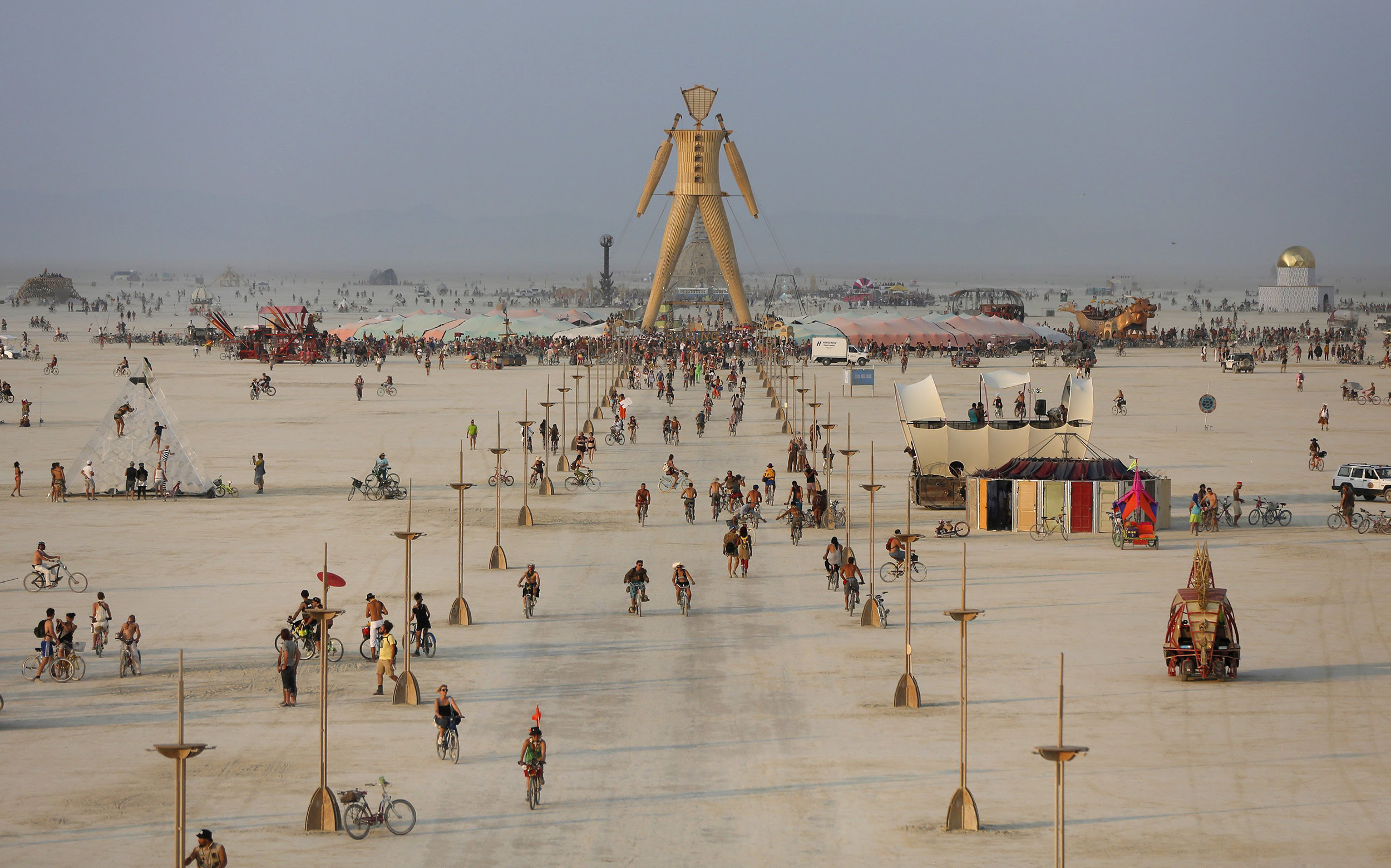 Burning Man՚s rhetoric of sharing, inclusion, and decommodification makes it sound like a socialist utopia, a radical critique of capitalism, an effort to establish a set of values that are wholly at odds with the accumulationist materialism of the mainstream. They are pretty serious about obliterating the market economy: no monetary transactions are allowed (with two exceptions: ice and coffee are for sale) and you are even expected to tape over corporate logos on clothing or equipment. Gifting is the norm, and participation rather than passive consumption is expected. It might sound like bullshit, but I was pleasantly surprised by how thoroughly and successfully these values are realized in practice.

This attitude coexists uneasily with the huge influx of Silicon Valley money and other rich individuals. Not only hip young tech leaders like Larry Page and Mark Zuckerberg, but the VCs and even Republican moneymen like Grover Norquist have thrown in. The participatory nature of the event appears threatened by so-called “turnkey camps” where rich people pay for fancy RVs and “sherpas” to do the hard work of providing life support and comfort in the harsh desert environment. All of a sudden the elitism of the default world threatens to reproduce itself into this alternative universe that was supposed to be an escape from things like that.

Burning Man has always ben elitist, in a sort of self-selecting way – not an elite of the moneyed, although going isn՚t cheap. While you have to have a certain level of well-offness to participate, it really requires more in the way of freedom than money. Doing it right requires months of preparation, so the real filter is whether you are enough of an independent artist/hipster/whatever to devote your life to something crazy. This very high level of required commitment (of time, money, risk, and discomfort) is a big reason it works at all. Sharing is a lot easier when you know that everyone else is committed to the same craziness you are. Subcultures in general have a problem of getting diluted by hangers-on who aren՚t fully committed as they should be; making you camp out in a remote alkalai desert serves a similar function to a fraternity initiation or gang tattoo – it creates a barrier to entry and forces people to pay for the privilege of belonging. Being there is itself a costly signal of shared values which enable the participants to trust each other more than they would some random on the street.

That՚s the real reason people are upset at turnkey camps, not because rich people are douchebags but because the commitment barrier is threatened. If you can buy your way in, the cultural value of being there is diminished. I don՚t mean to imply that this is mere snobbery: boundaries are important if you are trying to establish a space that is explicitly different from the everyday world. Money eats away at social boundaries, both traditional ones and subcultural ones.

If the issue was just that a great annual desert party and subculture was getting its soul diluted, then nobody but the participants should really care. The article advances the much stronger and more interesting thesis that Burning Man՚s politics mirrors and feeds larger trends in the Silicon Valley culture – libertarian ones basically, the idea that government and democracy is fundamentally broken, that we should rely on the largess of the enlightened rich to provide public goods.

So rather than an egalitarian community of roughly equal sharers, the author sees an aristocracy of the rich providing bread and circuses (literally at Burning Man, figuratively elsewhere) for the masses, mirroring the weakening of democratic institutions and their replacement by the whims of corporate largesse. Mark Zuckerberg՚s intervention in the Newark public schools being an exemplar of this in the default world. Charity is lovely but not a replacement for robust governance, and Burning Man՚s promotion of a gift economy, rather than a harmless image of a better world, actually becomes propaganda for rule by aristocracy and against democracy.

While there may be some truth to this, I don՚t really buy it as a critique of Burning Man, which is simply too huge and overwhelming a phenomenon to be reduced to ideology. The event doesn՚t pretend to be a democracy, it՚s a community with alternative rules and alternative status hierarchies – and being a rich turnkey camper is pretty low status. As far as I can tell, the event still is about insane levels of commitment to art, individualism, and other weirdness, and none of that essential nature is threatened by the presence of some rich people. If they are spectators rather than participants, it՚s their loss, nobody else՚s. That՚s the thing about radical participation, those who participate get to say what something means, those who stand outside watching or critiquing have missed the point.

The attempt to graft a political agenda onto an ecstatic festival reminds me of the rupture in the sixties between the hippie/psychedelic/dropout wing of the counterculture vs. the more politically-minded parts like the anti-Vietnam war movement (I am not quite old enough to have personal experience of this). These two factions never quite got each other, despite their shared opposition to the mainstream. They expressed different values in different ways, although of course many individuals had connections to both camps. The politicos were impassioned humanistc idealists who wanted to change the world by seizing power, the hippies were more like romantic artists, whose strategy for change was self-transformation and personal empowerment. My own favorite sixties heroes were the Yippies like Abbie Hoffman and Paul Krassner, who were explicitly trying to bridge this gap.

Burning Man is way above and beyond politics. It՚s some combination of wild party, transcendent art experience, and temporary autonomous zone, and as such should be taken as an effort to break out of the tedious parameters of default world politics. Not left or right, but orthogonal to that axis, pointing in a direction beyond. Nobody should confuse it with a political movement for social change, despite the idealistic communal values. Like the drugs that are a key component of the experience, it should be considered a temporary alternative state of being, that at best has some tantalizing suggestions for how the regular world could be different.

[ I am missing out on Burning Man this year, instead wistfully and lamely listening to the online radio station and watching the video feed to recapture a bit of the mood. Some part of me is there; some part of it is here with me, trying to express itself. ]

[ Fred Turner՚s excellent paper on the relationship Burning Man and the tech community explores these issues in more depth. Basically he agrees with Jacobin that Burning Man culture and Silicon Valley culture mirror reinforce each other, although he is less focused on the pernicious aspects. ]