Preverbabble is a term I coined a few decades ago to refer to the brain’s (or more modestly, my brain’s) prelinguistic chatter, a sort of rhythmic stream of mostly nonsense syllables that occasionally forms itself into words. Mostly this happens outside of consciousness, but in certain states it is possible to perceive it directly. These states seem to involve a temporary displacement. Usually the verbalizing parts of the mind are controlled by the semantic parts; in this state the more motor/rhythmic parts get the upper hand. Kind of fun! Maybe this is where poetry comes from, but my own little musico-verbal engine seems to produce mostly nonsense and occasional unpublishble doggerel.

The closest representation I can think of is the language of Joyce’s Finnegans Wake, especially the “thunder words” such as:

Anyway, the term bubbled itself back into the foreground of consciousness today for some reason, and a quick check on Google revealed exactly zero uses of it, so I thought I might as well stake my claim to originating it.

And ... wishing everyone an orthogonal New Year!
Posted by mtraven at 12:16 PM No comments:

Email ThisBlogThis!Share to TwitterShare to FacebookShare to Pinterest
Labels: fun with the brain, words

My yearly ritual of trying to select and cluster the past year’s posts in an attempt to discover just what it is that I am trying to do here.


The number of posts this year was down quite a bit (44, previous few years were all around 65), for probably a variety of reasons – more serious discussion happening on social media sites, and I changed jobs and put some serious effort into a long guest post at Ribbonfarm, all of which were competition for my output.

Hacking and The Computational Life

Fun with the Brain

Philosophy (for lack of a better term)

Crazyism
A Consumer's Guide to the Foundations of Reality
Great and Universal Ignorance
Refactoring myself
Transpersonal metacognition: it's on!

Portraits of Unicode Characters, #1 and #2
On the unpower of words
Decentralized Intelligence Agency

The Prophet Motive
The Same and Not the Same

Doing data visualization is kind of trendy these days but that doesn't mean it isn't fun. Here's something I whipped up that maps US counties by population density vs. % Democratic vote in the last election. Interactive version with map is here. 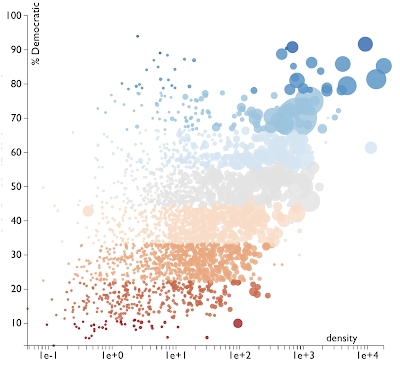 It's no surprise that denser areas (note the log scale) tend to vote more Democratic, although it was a bit startling how pronounced the correlation is. If you ignore the small smattering of low-density counties that went Democratic (and pretty much all of them are areas dominated by a racial minority) then it's almost perfect. One party represents urban cosmopolitans (that is, the civilized, which just means living in cities) and the other rural hicks.
Posted by mtraven at 12:09 AM 3 comments:


For most of my life I was basically an angry young man, pissed off about the state of the world but in no way holding myself responsible for it.

Now I’m a parent, and not young, and that role no longer fits my life. Other people depend on me for making their world safe, meaningful, supportive. I am no great shakes at this, it doesn't really come naturally, but I suppose I muddle through OK just as most parents do. My children are alive, healthy, growing up, and starting to find their own ways. And guess what? They are angry too, sometimes justifiably, and I find myself unwillingly playing the other side of that drama.

I don’t have a hell of a lot of influence on the larger world, so all I can do is create small local spaces that are reasonable safe and supportive. And try to do my part to influence the larger world, through voting or making my opinions known. It’s not much, but what else can I do? Other people have pretensions to being in charge.

Well, if those people are in in fact in charge, they have failed. It’s probably more accurate to say that nobody is in charge. Obama is the president, but he can’t stop a mass slaughter of kindergarten children, and he can’t act to stop climate change.

If nobody is in charge then there is nobody to blame, which seems to be exactly equivalent to saying that we are all to blame. We have all failed in our most basic responsibility, to create a safe world for our children. My personal righteousness on these issues means nothing. Feeling guilty accomplishes nothing. Joining the choir of exhortation to improve may be a bit better, but it’s basically farting in a hurricane.

Maybe some good will come out of today; maybe the political system will snap out of its stupor and realize that we need fewer guns and more mental health resources. Maybe. But a lot of good that does the murdered children and their families.

Climate change is very different from this sort of incident, that will convulse the media for a few days and then be forgotten. It’s big, it’s slow, but it’s going to kill a lot more than 28 people. But we seem entirely unable to act as responsible adults about either of these issues, and most others.

On behalf of the entire adult world I want to beg forgiveness from my children. They have every right to be angry, and since there is no proper target for their anger other than everything, they may need to take it out on me.

Speaking of refactored agency, here’s an article covering the new subfield of neuroparasitology. Apparently it is fairly common for one organism to biochemically take over another and influence its behavior, so the host ends up acting in furtherance of its occupier rather than itself.

When I read this, I had a momentary flash of all the other, non-biochemical brain parasites that have infected me: all the ideas and goals I have played host to, concerns for money and status and respect and righteousness. All the people I ever knew and felt a need to impress. All the things in the world that attempt to snag my attention and have planted a symbolic seed in my head that draws me in their direction. All these are parts of me but they are also introjected mechanisms with their own interests, divergent from my own.


But it is probably wrong to say that there is a true self in there that is being infected by outside agents. More like I am constituted by this chaotic assemblage, which is no more or less than human culture.