A map of mathematics 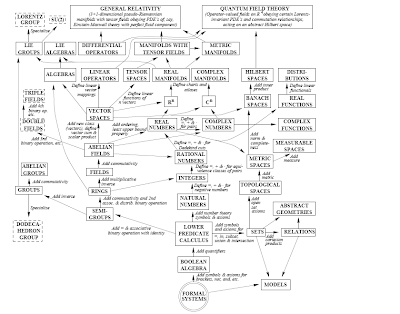 This paper Is “the theory of everything” merely the ultimate ensemble theory? by Max Tegmark is extremely interesting in many respects, but aside from its way-out metaphysics, I really appreciated this diagram showing common mathematical structures and their relationships. When I actually was trying to do math years ago, this is something I wished for and occasionally tried to construct myself.

Alas, I've mostly forgotten most of my math (and I've never really been able to grasp modern physics) but this table lets me fantasize about picking it up again -- at least I would be able to figure out where to start, what bit depends on which other bit, and where it all ultimately leads. Although apparently category theory is really where it's at in physics (or was 10 years ago) and that doesn't even appear in the diagram.

The only postulate in this theory is that all structures that exist mathematically exist also physically, by which we mean that in those complex enough to contain self-aware substructures (SASs), these SASs will subjectively perceive themselves as existing in a physically “real” world.