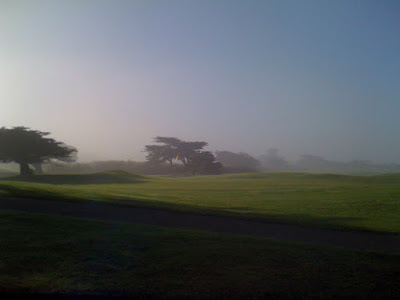 This year they moved my polling place to City Hall, right on the ocean. This is one of the most beautiful times of year here in Pacifica; it was a cool clear day with a high surf, breaking over the sea wall, and producing a fine mist instead of the more usual fog, so everything was suffused in a blinding white light. Since I already have a model in my head of voting as participating in a civic ritual, it felt like entering Democratic heaven.

I enjoy election time, it's a chance to come across whole classes of people I never see in ordinary life, and enter different spaces. Everyone's spirits seem a little bit freer than usual, with this temporary escape from the usual structures of power into the sphere of democracy. Even if the candidates are bought and sold, and cynicism is off the charts, the feeling persists, because ritual is powerful that way.

I approach voting the way I do actual religious services -- with mixed feelings, genuine enthusiasm combating a more informed and powerful skepticism. With something of a sense of duty -- it's not like this is what I really want to be doing, but it's what humans do, and since I haven't invented anything better for myself yet I must participate along with the community if I don't want to be a complete outsider to life. 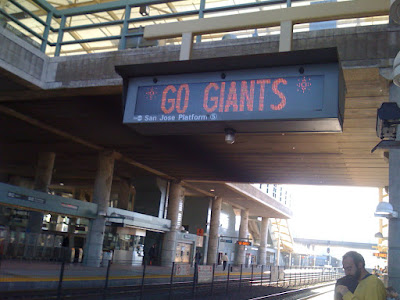 Of course around here people are also high on the other civic religion of the US, baseball. I have to admit that I have an active disinterest in professional sports and although almost everyone in the Bay Area has Giants fever, from intellectuals to manual laborers to punk anarchists, it leaves me cold. This makes me feel like an awful snob. From my outside perspective, pro sports seems like an even purer version of The People's Romance -- a sort of Schelling point for communal enthusiasm, a way to unleash the spirit in a controlled and harmless way (not always harmless, actually the US is pretty tame in this respect compared to European soccer hooligans and the Blues and Greens of Rome). I can see the functional role. But why can't this be something that's at least interesting? Why can't every city fund a big band, for instance, and have them engage in a series of cutting contests until they reach the World Series of Jazz? That would at least be worth watching.

[[note: the post title is a reference to Philip Pullman's His Dark Materials trilogy, whose plot involves nothing less than a war on god himself -- the Republic of Heaven is what will be established in his place. ]]
Posted by mtraven at 11:50 AM