"A Kind of Kafka Steeped in LSD and Rage" 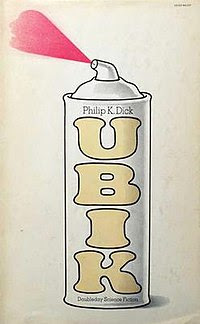 So there is a Philip K. Dick festival this weekend. I think I will be going, although not sure precisely why. I am a fan, but not a fan of fandom. But this has too many interesting speakers to ignore. PKD is more than a pulp SF writer – a visionary, spiritual seeker, philosopher, prophet. I get the sense he would be amused by those labels, and perhaps refuse them.

I was first exposed to PKD in my youth, when I stumbled on a copy of Ubik at the library. At the time it seriously freaked me out, and possibly I never completely recovered from that. Ubik is a story of the usual Dickian mid-level corporate functionaries who get caught up by the machinations of implacable and hostile forces, and end up having reality itself crumble around them.

Back then, science fiction (like computer hacking) was a tiny and reviled subculture. Since then both have not only become mainstream, but culturally dominant. PKD's work of course has been mined for movie scripts ever since his death, with middling results. Some of those movies are good, some are even great in their way, but basically none of them (with one exception) seem to capture any but the most superficial aspects of his vision. There are probably many reasons for that, but one is that PKD's heroes are almost uniformly schlubs, and while it is possible to make a movie with a schlubby hero, it is not possible in the context of a summer-sf-blockbusters. The only movie to really be deeply Dickian, that is, to use the cinematic medium in such a way as to convey the actual themes of Dicks' work, is the neglected A Scanner Darkly.

Dick returned over and over again to certain themes, one of which I also seem to return to: empathy, and its absence. There are at least two great inventions of his in Do Androids Dream of Electric Sheep (which formed the basis for Bladerunner) – The Voight-Kampff machine which could distinguish replicants from humans by measuring their empathy and the religion of Mercerism. The former made it into the movie; the latter did not, which is a pity, but maybe it is another one of those things that does not translate to movies. Mercerism was a kind of jacked-in version of Christianity where believers can share in the sufferings of William Mercer by means of an electronic device. This kind of thing – the sharing of actual spiritual presence over the intertubes – is something we are quite a long way from but I can't imagine it not happening eventually.

The idea (but not the actuality) of empathy pervades Dick's world. His characters all seem to be either casualties or agents of its absence. They are trapped in "a maze of death", which is none other than the universe itself, seen as a cruel machine manipulated by sinister false gods. Their make pathetic attempts to cling to one another for support, but find the others either unwilling or unable to provide the needed warmth. Genuine empathy, the shadowy presence of the true god blocked by the constructs of the demiurge, exists but only can be seen in glimpses.

Now that it occurs to me, the parallels between the Dickian and Kafkaesque are too strong to not see, and I feel vaguely embarrassed by not having grasped them before now, given that they are two of my favorite writers. Probably they too obvious to list, but one that strikes me is the combination of metaphysical terror with genuine if mordant humor. In Kafka, the machinery of death is composed of bureaucracy and the stuffy social structures of prewar Europe, while in Dick they are built out of automation, warring corporations, and drugs. Same shit, different eras – we are all trapped in these alien-yet-familiar systems, systems built by humans but in the process of spinning out of human control.

Dick's universe is a little less bleak than Kafka's perhaps, since he allows the occasional emanation into the false universe of magical life-restoring substances from beyond its boundaries. Thus the title substance/product of Ubik reveals its true nature in epigraph of the final chapter:


I am the word and my name is never spoken,
the name which no one knows
I am called Ubik, but that is not my name.
I am. I shall always be.

[update: well, that was -- different. I thought I was a PKD devotee, but I was a mere tourist amongst these people who in many cases knew the man personally, and have devoted years of study, and have internalized the man's enormous sprawling oeuvre.  Many serious scholars too, which I didn't expect. PKD is about fragmenting and fluid identity (among other things), and reading his works has a subtle deranging effect on one's sense of self (true of all authors in a way, but Dick takes it to a whole other level). So to be in this crowd was somewhat like being on a PKD drug, and his spirit seemed to enter and animate everyone there, like a more benevolent version of Palmer Eldritch.]
Posted by mtraven at 7:39 PM

get me a few bottles of Ubik, man.