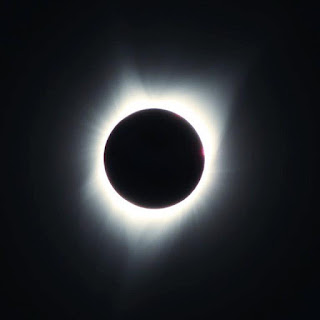 Eclipse of the Heart

So I went to see the eclipse in central Oregon, in the company of 30000 or so hippies at a music festival, kind of a lighter weight version of Burning Man (same esthetic, less extreme in weather and participation practices). Not sure how much I belonged there, of course – even more so than BM, the crowd is dominated by the young, the beautiful, and the partying. But for some reason I feel a pull towards such things, and the conjunction of the eclipse and the festival was irresistible. I took my son along since he has inclinations along those lines -- here he is posing next to Ken Kesey's old bus which was on display: 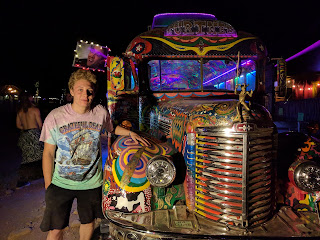 The eclipse itself was as wondrous and magical as anything I've ever seen. It really made me viscerally aware of standing on a planet. There were tears in my eyes, and the same was true of many others there. I'm not even sure why – it's just astronomical bodies moving according to predictable physical laws, so what's the big deal? It's a rare event, but why should it be an emotional event? In my case I don't think they were tears of joy, or sadness – more like tears of connection, a feeling that despite the constant forces of isolation and alienation, by being part of this event I am hereby demonstrably connected to the heavens and to all the other watchers as well.

That is to say, it was a ritual. To quote myself: " ritual, broadly speaking, exists any time humans come together around some shared focus of attention." An eclipse is perfect for this role, because it is rare, overwhelming, and universally accessible. The large-scale workings of the cosmos, usually taken for granted, produces a spectacular reminder of itself. For one brief moment everything is different and everyone's attention is shared and everybody knows everybody else is paying attention to the same thing as well. And because this event is a function of the mechanical workings of the universe rather than any human creation, it is mercifully free of political implications – all factions in the culture war will put down their weapons for at least two minutes. Not that we can't impose some cultural meanings on it – it's a metaphor of death and rebirth, most obviously, but I saw something else there.

While waiting for the cosmos to do its thing, it occurred to me that a festival and an eclipse have some deep structural similarities or metaphorical resonances. A festival is a short-lived period in which the normal order of things (work, money, politics, etc) is replaced with Something Else. In a solar eclipse, the sun (identified in myth with authority, reason, and order) is temporarily obscured and replaced with something dark and strange. Both are soon over and people and universe go back to their regular lives, perhaps changed by the experience.

So what is this Something Else, this alternative order that festivals manifest? I don't think words (or at least, my words) are capable of characterizing it, because in its essence it resists characterization. Part of its nature is resistance. It is has definite religious qualities (not a very original observation). It's too easy for me to dismiss it as nonsense, a puerile mess of shitty new age and hippie thinking, but I am going to try to take it seriously, at least as seriously as I'd take any other religion that I don't practice but appears to provide a matrix for an interesting community and culture.

What are some of the foundations of this religion (which I guess I will call festivalism)? 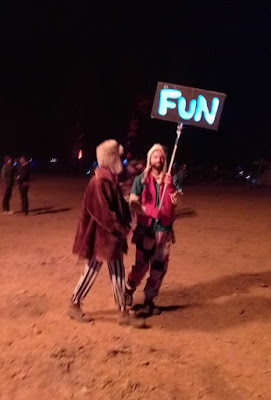 I also want to say that there is kind of an emphasis on visual and geometric thinking rather than symbolic/linguistic. There is a certain lack of critical thinking, and even a distrust of language and reason, perhaps because they are tools of the enemy.

And all of these qualities together compose a critique of mainstream culture and a proposition for an alternative. That last proposition seems quite overblown, but it is kind of essential to the whole package – all of this foolery is in pursuit of a better world, all this devotion to self is not merely for the self. It reminds me that there was a cultural revolution in the sixties, which had a great transformative impact on culture but almost none on the fundamental structures of social power. This crowd seems like they didn't get the memo that that revolution was a failure and are keeping the dream alive. And why not? It may be that the ideas are worthy but that actual change takes a long, long time.

A couple of ideas I encountered struck me as really bad, but I was in the right mood to consider that maybe they might actually be useful, when considered from a different angle.

On our first night I wandered into a small performance tent and heard a duo playing a bunch of weird instruments including digeridoo and antler-bone flute. One of their songs was a paean to "radical self-love", which immediately set off my bad-meme detectors – could there be anything less radical than self-love, a quality which humanity does not seem to lack and which to me implies infantalism, passivism, and stasis (since if you love yourself you will feel no need to change or improve yourself)?

On the other hand – I'd just been reading a book by a Freudian so I was primed to believe that most of our misery is caused by our superegos, introjected bits of cultural machinery devoted to criticism, forbidding, and negativity. And if the Freudian solution to the problem is endless and unsatisfactory talk therapy, maybe a more radical solution was called for, one that simply overthrew all that stuff by declamation. Self-love is radical because the world tells you (makes you tell yourself) that you are unworthy of love, or that love is dependent upon adult currencies like status, money, and power. Challenging that, declaring yourself loved despite all the ways that you might seem to suck, is a radical act. I can sort of see it as the spiritual foundation needed for an actual radical rethinking of society – what could the world be like if we didn't hate ourselves most of the time?

Unfortunately upon getting home and googling it appears that radical self-love is (a) a mere self-help movement and (b) aimed exclusively at women, so doesn't seem to be too much there for me – not radical in the sense I'm interested in. Still there is something suggestive about the phrase. Anarchism (radical politics) is overly motivated by fear and hatred of authority, maybe if it was combined with radical self-love it could prove to be more robust. Also worth noting: the concept appears in Rousseau as amour de soi, a sort of pre-civilizational self-love that is contrasted with amour-propre, a more relational kind of self-love that depends on the opinions of others.

On another occasion, I was getting water from a public spigot and a couple of old hippies started chatting me up and informed me that the past and future were illusions and only the present moment was real (spontaneous metaphysical conversations are a common thing at such gatherings). This seemed extra-dumb considering we were in the midst of a festival organized around a phenomenon that had been precisely predicted years before it actually was to happen. But – it's a fairly common belief among mystics and it was the topic of an early Grateful Dead song, so there's that. As is my practice, I tried to find an interpretation or state of mind in which that statement would feel true .

There is indeed something special about the present moment. It is where the self is, the only part of the universe that can be directly apprehended. All those other moments are filtered through a haze of memory and representation, but the present is present. It may not be the only real moment, but it definitely has some quality that the other ones don't.

At least, that is how it appears to an embedded consciousness. From a physicist's point of view, all of spacetime is equally real, the flow of time and change is illusory, and there is nothing special about any particular moment. But I am not a physicist, certainly not in my daily life. The physicist's view of reality is in a certain sense incommensurable with or inimical to lived experience. These village elders were telling me in essence to ignore the learned rational scientific models of reality and pay attention to my actual experience. Which seems like a good thing to be able to do, at least temporarily.

Marvin Minsky used referred to these sorts of thoughts ("all is one" being canonical) as "mind-destroying ideas" – that is, ideas that were not necessarily wrong, but led nowhere, rather than to learning a better rational understanding of the universe. I think that's a bit overblown, these ideas don't quite destroy the mind, unless you take them too seriously, which I'm not about to do. Instead they seem to be aimed at subverting certain modes of rationality, creating spaces for the apprehension of the aspects of reality that are not well suited to language. That seems like it could be worthwhile.

As the events (eclipse and festival both) recede in memory, they don't become any less real, although my consciousness of them does, rather like a dream – it's a week later and I can feel myself struggling to recreate or at least remember the mental state I had at the time. It kind of works. But the point of a ritual is participation, not remembering. Everything is distinct from its representations; rituals especially so. So I can't very well describe what I was going through at the time, but from the current vantage it seemed like a point where everything – humanity, cosmos, time, timelessness, and my personal concerns – came briefly together. It may be that they are always together but it takes a special event to make that fact obvious.

[Addendum: really tempted to retitle this:

I admire your patience with the cosmically-inclined! It would be easy to dismiss yoga-breathing drummers as soft-headed, but you take them seriously.