I asked this on Twitter the other day and got not much in the way of answer.

What is it like to be a Trump supporter?

Although I have studied the right, and even gone so far as to try to intellectually engage with them at times, I find I can't quite wrap my head around what it must be like to be a Donald Trump supporter. That is to say: I can to some extent understand the arguments and the emotional dynamics that lead someone into being, say, a libertarian or neoreactionary, or even a frothing racist. These ideologies may be wrong or loathsome, but it feels like I kind of understand them, in that I can imagine what it is like to hold to them. They may be rooted in bad emotions (anger, hate, fear), but I'm human, I have my share of that stuff, I can sort of understand how it can warp your beliefs.

But I can't quite put myself in the place of a Donald Trump supporter. Something in my imagination balks. He is such a viscerally repellent figure. How the hell can anybody look at him and say, that's who I want to follow, give me more of that? The man is such a constant display of the worst parts of human nature, and the worst parts of the American character. The constant bragging and whining. The proud ignorance. The tacky fraudulence of everything he's involved with. The utter contempt for truth or for any values other than "winning". Think of a good human quality: kindess, courage, strength, wisdom – Trump embodies the opposite of it. 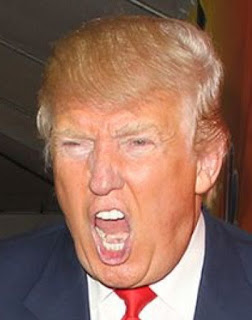 So even if I was somehow on his side ideologically – say I hated Mexicans for some reason, or wanted to keep blacks out of my leafy suburbs, or felt like sticking it to China, whatever – I don't think I could get past the utter vileness of the man.

There's something almost metaphysically disturbing about Trump; he emits a whiff of the abyss, his triumphs hint at the death of meaning itself, the end of virtue. The cultists attracted to him remind me of those that appear in Lovecraft stories: people who have utterly given over their humanity to something depraved and alien, and worship it with a savage inhuman joy. I'm in the position of a Lovecraft narrator watching helplessly as these inhuman powers manifest themselves in a slow but inexorable march towards madness.

But horror aside, what drives these people? Either they don't see what I see (but it's not like Trump's qualities are subtle or hard to detact), or they see it and just don't care. Other considerations are more important. For example: Here's the editor of the National Review explaining that voting for Trump:

is the only way for his voters to say to the cultural Left, “No, sorry, you’ve gone too far.”…Trump is, for better or worse, the foremost symbol of resistance to the overwhelming woke cultural tide that has swept along the media, academia, corporate America, Hollywood, professional sports, the big foundations, and almost everything in between….To put it in blunt terms, for many people, he’s the only middle finger available — to brandish against the people who’ve assumed they have the whip hand in American culture.

Which is basically saying that the hatred of "the cultural Left" is so salient to these people that it overrides every other consideration, such as basic decency, esthetics, or even life itself (since Trump is quite directly responsible for the massive US death rate from Covid). The author of that piece says in the very next sentence "This may not be a very good reason to vote for a president, and it doesn’t excuse Trump’s abysmal conduct and maladministration." But yeah, fuck the left. I guess that is not entirly beyond my ability to imagine – I know what hate is like. I hate Trump, Trump's supporters hate people like me. They think we have "the whip hand" and it is so important for them to seize this opportunity to say fuck you. There's a certain symmetry of feeling there.

But I can't quite make the symmetry work. The sides do not appear to be mirror reflections of the other; one side seems clearly better. No matter how hard I try, I can't take a neutral view of this conflict. There are those who make a virtue of being above the ideological fray, and maybe they are smarter than me, or more morally advanced, that's certainly a possibility. Maybe I am overly locked into my worldview, maybe I am deficient in the necessary empathic imagination. Maybe I am too bought into a constructed media narrative, and they just happen to be bought into a different one.

However: this is not a matter of preference, it's literally a matter of life and death. Covid is a life and death issue; so is fascism. So much as I might like to go all abstract and above the fray, I think the situation demands choosing a side and fighting for it. One thing about Trump, he makes it really easy to see who the enemy is, even if he confounds understanding.

The title of this post is a reference to philosopher Thomas Nagel's well-known paper What Is It Like To Be a Bat? The point of that paper is that while bats are presumably conscious and it makes sense to talk of their experience, that experience has to be utterly unlike our own, given the vastly different world the bat lives in by virtue of its different senses and abilities.

Trumpists are alien along a different but no less confounding dimension.

That is to say: I can to some extent understand the arguments and the emotional dynamics that lead someone into being, say, a libertarian or neoreactionary, or even a frothing racist. These ideologies may be wrong or loathsome, but it feels like I kind of understand them, in that I can imagine what it is like to hold to them. They may be rooted in bad emotions (anger, hate, fear), but I'm human, I have my share of that stuff, I can sort of understand how it can warp your beliefs.

I've seen actual reasoned arguments for all three, so why assume they have to be rooted in negative, I mean "bad", emotions rather than (potentially erroneous) logic and (potentially inaccurate or incomplete) facts?

Something in my imagination balks. He is such a viscerally repellent figure.

That sounds like a position based on bad emotions. :)

We're on the high end, but we're not an outlier. His stuffing things up really didn't help, but the D's initial boneheaded "it's really not that bad" response to his "blame China" also didn't help. I see a lot of demands that we have a Federal mask mandate, but I'm skeptical that that would actually hold up after immediately being challenged in court as a thing that the Federal government does not have the power to do. I am skeptical that we would have done more than just a little bit better with someone else in charge.

More generally, the things that have gotten done are somehow not the unmitigated disaster I expected based on his personality.

I don't like him. At all. But a large part of that is about standards of personal behavior. Which is a culture / social class thing. Which means other people likely see it as a positive. Even the objectively bad parts (he's clearly a crook, and having crooks in power has a long history of being harmful), well if you're a conflict theorist and think he's on your side even that can look like a positive if you assume he's only a crook towards people trying to hurt you (note, I see "we're fighting because the pie is fixed" conflict theorism as distinct from "we're fighting because it's personal" hatred).

I think the right's hatred of the Left is a major fuel, and

They hate the left (in part) because so many on the left are so smug, so addicted to the rush of moral superiority, so willing to chastise. The left can come across as stubborn, self-righteous bullies. The kind of bully that LOLs at bad grammar, bad manners, bad fashions.

The right does this too.

We'd all be better off if we treated the other side with respect, curiosity, assumption of good intent.

@Anonymous@7:59 -- I agree, and I've tried. I've tried intellectual engagement with rightists. More than most people on my side, I've tried to accept that my opponents aren't inherently evil or stupid, at least by their own lights, and tried to understand their motivations.

This post is mostly an admission of failure. Just as political civility in general seems to be breaking down, my project of understanding is also going under. I don't care about the ideas or values or hopes of Trumpists, I just want them defeated. I look on them and I don't see good intent. I see evil, murderous, dangerous, destructive intent.

This is not to say the left doesn't have problems of its own, smugness being one of them. But they aren't the ones driving the country full-steam-ahead into apocalypse.