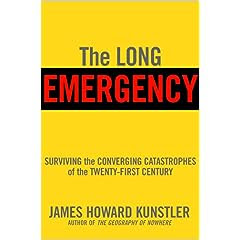 The Long Emergency: Surviving the Converging Catastrophes of the Twenty-first Century

A book in the we're-all-doomed genre. Kunstler focuses on the coming peak oil crisis and our incapacity to deal with it. A long-time critic of suburbia, he is onvinced that our investment in car-dependent infrastructure is really what's going to doom us -- we will be completely unable to adapt to a world of scarce and expensive energy. While this is the central crisis, other related ominous trends feed into the general sense of doom -- global warming, emerging diseases, and a economy based on no-longer-supportable fictions. Globalism and the Wal-Mart economy comes in for some whacks, based on their cheap-energy-dependent business model.

None of this is exactly news, but Kunstler does the serivice of wrapping all these alarming trends into a readable package designed to wake people up. The future looks pretty bleak, with the degree of bleakness dependent on the degree of energy dependence vs. the degree of sustainable communities. The sunbelt states (Arizona, Southern California) will suffer the most as the cheap air conditioning goes bye-bye. Suburbanized areas will be doomed. The Northeast will recover its old structure of small industrial towns which can support local manufacturing and local farming.

This vision suffers from being completely backward-looking, and appears to be fueled by nostalgia. Essentially, the idea is that the entire 20th century will be undone, and we will go back to the way we lived before abundent petroleum-based energy -- we'll be mostly farmers. This seems extremely unlikely to me, and undesireable as well. Modern technology will not disappear, although it may change radically as its components become more expensive. Telecommuting has the capability to replace physical commuting, for instance -- this is not an option Kunstler considers, since he apparently believes that all modern technology is going to disappear along with the oil.

This is a form of flawed argument that pops up frequently in the book. There is an implict assumption that oil is going to completely run out (rather than just becoming expensive) and that anything that is even a little bit oil based now cannot work in the future. He dismisses solar energy, for instance, because it takes non-renewable resources to manufacture and transport the panels. Whether solar is workable under conditions of oil scarcity requires a quantitative economic argument -- it's not going to be an all-or-nothing thing.

The book is also marred by a misunderstanding of scientific concepts like entropy and closed system. In general Kunstler does a reasonable job of presenting the technical side of his argument, but occasionally distorts things to support his argument.

In short, this book performs the valuable service of waking people up, but is not a reliable guide to the future.
Posted by mtraven at 8:06 AM